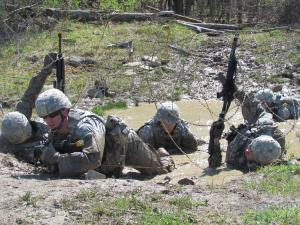 “It’s a chance to get us caught up, maybe even a little ahead of the game.”

That is how Cpt. Justin Pelletier, from Mohawk, N.Y. and the head of security for the Auburn-based 102nd Military Police Battalion, described the battalion’s pre-mobilization training at Fort Drum alongside the Manhattan-based 37th Finance Detachment.

As the two units gear up for deployments later this year, Pelletier noted the National Guard soldiers do not train as often as their active duty counterparts but are expected to still perform at the same level when they’re sent to the front lines.

“Active duty guys do this all day, every day,” he said. “We have the same requirements as active duty. … It’s a chance to get the rust off and use that downrange.”

Those two weeks of training culminated in what is called the fight lane , a practical training exercise that incorporates every warrior task and battle drill the soldiers had been rehearsing up until then. In Army terms, the first two weeks are the crawl and walk phases, while the last day is the run phase.

Mohamed led the third of eight groups -- four from the 102nd and four from the 37th -- to go through the fight lane Sunday, May 11.

After forming up into a squad element, the group began the lane and took sniper fire soon after starting their patrol. Then, the soldiers encountered first a reporter, who attempted to ask soldiers questions amid their operations, and next the local mayor, an ally who warned the squad about enemy activity in his village.

The squad diverting its path through the woods to avoid a minefield the mayor told them about and were called on to react to direct fire, first to their front and then to the right flank. With those tasks, the soldiers were also called on to evaluate casualties and call in a situation report and a medical evacuation report. Next, the squad gathered around an observational rally point, where team leaders checked their soldiers for water and ammunition and the squad leader sent a team ahead to scout out an area leading into the village.

The team had to breach the area, which was blocked with concertina wire, and guide the rest of the squad through the area, as soldiers took turns providing security and helping out their battle buddies.

Immediately after breaching the first obstacle, the squad once again reacted to contact while still making their way through subsequent obstacles as they entered the village. Soldiers formed four-person teams and cleared the buildings around the village while responding to fire and searching for enemy combatants.

As they made their way out of the village, the soldiers were faced with a near ambush and assaulted through to a bunker. Then, the squad reacted to indirect fire before coming across an improvised explosive device and calling in an unexploded ordnance report.

The lane ended with the simulated arrival of the explosive ordnance disposal team and a controlled detonation of the IED. After gathering back up at the staging area, Mohamed and the soldiers of the 102nd conducted an after action review.

“As long as they’re having fun, they’re learning something,” Mohamed said, noting soldiers often have fun conducting the fight lane because of the real-life scenarios it presents along with opportunities to put their prior training to use. “We try to make it as real as possible.”

Pelletier said the 102nd enhanced their training by putting junior soldiers into the leadership roles of the squad and having the senior soldiers mentor them throughout the two weeks of training, especially the fight lane.

He said that serves a two-fold purpose , it helps junior soldiers properly gain experience and build confidence with the assistance of their senior leadership, and it also simulates American forces handing security responsibilities over to national militaries.

“It’s better for them to do it acceptably with their own hands rather than you doing it perfectly with your hands,” Pelletier said.

As a trainer, Mohamed said he questions every soldier, from senior noncommissioned officers down to privates, on the aspects of the battle drills and makes sure each member of the squad knows how to do each other’s job.

While soldiers are supposed to perform at full-speed during the “run phase” of the fight lane, Mohamed said he emphasizes moving slow in order to get it right but learning from mistakes that may happen during the rehearsals and the lane.