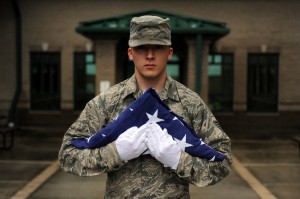 A member of the 106th Rescue Wing Base Honor Guard.

With 619 funerals conducted in the 2013-14 fiscal year, the 106th Rescue Wing’s Base Honor Guard is the busiest Honor Guard Team in the Air National Guard.

The team is also the eighth busiest Honor Guard in the total Air Force and the only Base Honor Guard recognized by the Air Combat Command Inspector General for their dedication to duty, training plan, and administrative procedures.

By law anybody who served in the United States military is entitled to funeral honors, specified as the playing of Taps and the presentation of an American flag to the veteran’s family by a minimum of two service members.

Being able to call on an Air National Guard honor guard helps get the mission done, said Master Sgt. Roman Kernitski, the assistant non-commissioned officer in charge of the Honor Guard at the joint base.

“Our area of responsibility is 68,000 square miles. The 106th helps us manage the area and helps us allocate resources throughout,” Kernitski said. “They always answer our call and are eager to assist.”

“They’ve helped us tremendously with the amount of details we can do,” said Tech. Sgt Nicholas Bryon, the noncommissioned officer in charge of the honor guard a Joint Base McGuire-Dix-Lakehurst.

“We’ve increased their manning from two slots to five slots in the last three years,” he added. “The funerals we’ve been able to do on Long Island have increased, but our own manning here is the same. We used to have to drive to Long Island all the time, but the 106th has made our jobs easier.”

Staff Sgt Gregory Funaro, non-commissioned officer in charge of the 106th honor guard said he is happy about how many details his team can provide.

“We’re not straining ourselves and it shows the program is growing a lot from where it used to be,” he said, referring to the increase in slots. The 106th honor guard has paid final tribute at funeral ceremonies for Tuskegee Airmen, the first African-American aviators of the United States armed forces.

As members of the Base Honor Guard, Airmen are expected to uphold the standards of all in the Air Force and must epitomize perfection in dress and appearance, customs and courtesies and drill and ceremonies, Funaro said.

To ensure members are physically and mentally prepared to flawlessly execute the mission, Lance said he requires members to exercise a minimum of one hour each day.

Ceremonial guardsmen are required to be of good reputation, having integrity, ethical conduct and exhibiting standards which merit respect, according to the United States Air Force Base Honor Guard website. But members admit maintaining military bearing can be a challenge.

“What I tell them when they join the team is you never know what is going to affect you or what is going to touch you,” Lance said. “It may be that someone in your family is sick and the person that has died reminds you of them. It may be that the person who died is your age, or there is something in their life you can identify with. Regardless, you always have to keep your military bearing. It can be the hardest job in the military,” he explained.

106th Honor Guard members said they are honored to have the privilege and responsibility of rendering military funeral honors at interments, and showing the nation’s deep gratitude to those who, in times of war and peace, have faithfully defended our country.

Despite the grief family and friends endure at the loss of a loved one, a show of gratitude is often returned to honor guard members, detail members said.

“Many times when I’m presenting the flag, they thank us for our service,” said Senior Airman Larissa Morales.

"They show their love toward the military…and affection to us sometimes. There have been times when they hold our hand when we’re presenting the flag. You can sense just from the hand gesture they really appreciate it,” she said

Funerals typically bring together families and friends to honor and say goodbye to the deceased. Occasionally the BHG performs at funerals with no attendees, and such funerals stand out most to Senior Airman Michael Dancona.

“The funerals that don’t have anybody are probably the most rewarding ones for me,” Dancona said. “I don’t know what the situations are for some of them, but we are there and it’s proof the military doesn’t forget about them. That makes me feel good.”