September 20, 2021 | 4:44 pm COVID-19 Vaccines
On August 23, the FDA announced the full approval of the Pfizer-BioNTech vaccine for the prevention of COVID-19 disease in individuals age 16 and older. Read more.
Details 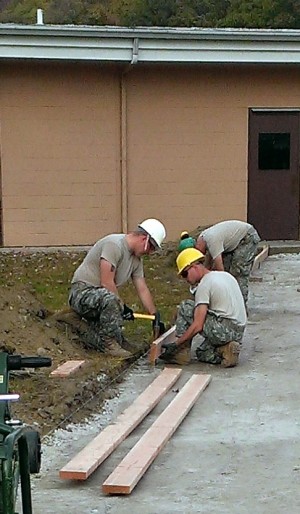 CAMP SMITH TRAINING SITE, CORTLANDT, N.Y. -- New York Army National Guard engineers construct a sidewalk here in late October, 2014. The mission was one of several troop-labor projects that the Soldiers accomplished in the first week of their two-week annual training period. The Soldiers, who belong to the 1156th Engineer Company and the 204th Engineer Battalion, also installed better drainage and dismantled some rappel towers to make way for the construction of a new maintainance facility.

In less than a week, 1156th Engineer Company and 204th Engineer Battalion troops installed sidewalks, improved drainage, dismantled rappel towers and completed some other projects as part of their annual training.

These troop-labor projects gave the Soldiers valuable on-the-job experience, saved the New York National Guard costs estimated to be between $250,000 and $300,000 and paved the way for more improvements, according to Frank Wicks, director of Director of Facilities Management and Engineering, and Camp Smith Post Director Mark Warnecke.

“We used the HEPPOE on virtually everything,” he recalled. “We’ve been trying to use it for a long time. Now we have at least 20 people trained on it.” The troops completed some of the tasks ahead of schedule, which gave them the time to take down Camp Smith’s aging grandstands, he added.

But taking down the rappel towers was a key project, Wicks said.

Ranging from 20 to 40 feet tall, the towers literally stood in the way of the construction of a new Combined Support Maintenance Shop (CSMS).

"It needed to be done," Wicks explained. "It would’ve stopped construction from going forward."

Using 22-ton cranes, safety harnesses and HEPPOE chainsaws, the engineers undertook the project, which they called the "deconstruction" of the rappel towers. As the term implies, it was delicate work, according to 1156th Engineer Company Commander Capt. Patrick Kelly.

"We had to take it down in segments and pieces," he said. They also had to dig out the towers’ bases, which were made of eight feet of concrete, he added.

Latching themselves to the towers themselves or cranes they’d positioned around them, the engineers carefully cut the structures up within three days -- one strut, railing and post at a time, Kelly recalled. No one was hurt and the Soldiers also cut four days off the project’s estimated completion date -- a testament to the troops’ skills and safety awareness, he added.

"We had a lot experienced guys working on the tower itself, just because we knew it was such a safety hazard with the height and or falling debris," said 1156th Engineer Company 1st Sgt. Richard Berardinelli. The troops had more than enough skill to take the tower down, stressed Beradinelli, of Cornwall, N.Y.

The engineers also improved Building 503, the home of New York Army National Guard Medical Command (MEDCOM), along with other units. Before being based at Building 503, MEDCOM often had to travel to units to conduct troop medical screenings, commonly known as Medical Readiness Weekends (MRWs), Warnecke said.

“We can actually give dedicated space to MEDCOM, instead of them having to come and temporarily set up, and break down, and set up and breakdown throughout the year,” he said.

Units can come to Camp Smith and accomplish and other required tasks, like weapons qualification, in addition to MRWs, Wicks explained.

“They have a home on Camp Smith," he said. “It’s becoming a full-service facility.”

However, poor drainage caused significant amounts of water to accumulate, or “pond” just in front of Building 503, Warnecke said. In winter, this water would freeze into a slippery, dangerous sheet of ice, he explained.

The engineer troops solved the problem by installing curtain drains near the downspouts of the gutters, then running about 100 feet of underground pipe from drains to the existing storm drain system, Warnecke and Kelly explained. The troops’ efficiency and skill shaved two days off the estimated time for that project, Kelly said.

“The guys and gals, the Soldiers did an outstanding job on that. We actually finished ahead of schedule on that as well,” he said.

“Especially when we’re doing winter MRWs here, it’s nice to have that sidewalk clear and going straight to the trailers from the building for them,” he said.

The engineers also installed about 37 feet of sidewalk outside the Regional Training Institute building. The engineers’ sidewalk work gave them great confidence to work with them again, Warnecke said.

“I’m really glad to see the results of this, because we want to continue to expand the campus atmosphere at Camp Smith, by providing more sidewalks between buildings and everything, so we don’t have Soldiers walking on roads all the time,” he said.

Though the grandstand de-construction project was scheduled for 2015, the engineers’ efficiency gave them time to take that on as well, Warnecke said.

As they did with the rappel towers, the engineers used chainsaws and other HEPPOE tools to take down the rickety grandstands, Kelly said. They finished the project in three days.

“It was a short-notice mission,” Kelly recalled. “We removed the seats first, then collapsed the roof.”

Wicks, who is also the former state command sergeant major, remembered attending courses at Camp Smith, standing on the parade field as high-ranking officers and other leaders passed in review, and “seeing the grandstands full of spectators.”

While that’s great history, priorities have shifted, and the grandstands were “un-maintainable,” Wicks said.

“Do we really want to spend resources painting that every year?” Wicks asked rhetorically. “No. It was a piece of infrastructure that had been place well past its prime.” Mobile bleachers, which are have a smaller footprint and are easier to maintain, will be used in place of the grandstands, he said.

The ideal troop-labor project, Warnecke explained, is one that benefits the state and gives the engineers training. They’ve even tentatively scheduled a conference to match their project list to the engineers’ training requirements, he added.

“Every nickel or dime that we can save with troop-labor projects can go toward other projects that we have to accomplish throughout the state,” Warnecke said.

It was a great opportunity for the troops to get training in their Military Occupational Skills (MOSs), Kelly said. That progress seemed to show in the Soldiers’ attitudes as they worked, said Berardinelli.

“They were definitely enthusiastic to work in their MOSs,” he said. “Sometimes drill weekends don’t allow for that, and that’s where (annual training) comes in.”

The improvements and use of troop labor fit with the state’s vision of cost-effective, modern and comfortable facilities, Wicks said.

“My objective is to manage the resources we have to improve the facilities for our Soldiers,” he said.