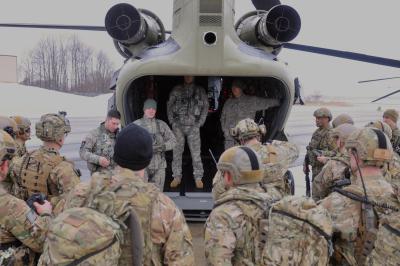 The planning required to conduct an air assault puts stress on the crews that routine flying doesn’t, Flansburg said.

An air assault requires the helicopter crews to coordinate the pickup of ground troops, conduct a tactical approach to the landing zone, conduct a tactical offload of the troops, and then quickly fly away, he explained. These are skills not tested in a routine flying mission, he added.

“Also, when supporting another unit, there is a certain degree of pressure to perform,” Flansburg said. “A lot of training value can be derived by operating under pressure. This is what our Soldiers got out of the training: the required preparation, deliberate execution, and pressure to perform which is similar to the real deal,” he added.

His company just transitioned to the latest model of the venerable CH-47 Chinook, and the Soldiers are looking for training opportunities to get to know the new aircraft better, Flansburg explained.

The training plan for the March 14 joint mission called for the Army Guard aircrews to land at Hancock Field Air National Guard Base, pick up members of the 274th Air Support Operations Squadron, or ASOS, and move them to Fort Drum about 45 minutes flying time away.

The ASOS Airmen are Joint Terminal Attack Controllers, or JTACS, who specialize in calling in air support in support of troops on the ground.

The Airmen conducted a practice assault on the combat trainning village at Fort Drum to sharpen the combat skills they need to work with infantrymen and other Army units in the field. Air Force Staff Sgt. Matthew Rossen, a JTAC with the 274th ASOS, played the part of the opposition force for the mission and explained why the mission was important for the 274th Airmen.

Rossen said it was the first time the 274th and the 3-126th conducted an air assault training mission together. He noted it took place at a slower pace to allow Soldiers to get accustomed to the helicopters and Airmen to learn how to conduct such a mission and call in air support with instructors in a safe environment.

“We’re basically starting at the crawl phase now to get our unit trained up, get their unit trained up because this is a new aircraft for them as well and they are getting used to it with all the upgraded systems in it,” he said.

With 10 people, plus pilot and crew, aboard each aircraft, the two helicopters took off from Hancock Field Saturday morning for the flight to Fort Drum.

Upon landing one at a time in a knee-deep, snow-covered, the Chinooks dropped off the two teams of Airmen and immediately took off again, as the Soldiers aboard left the area to conduct a separate sling-loading exercise with the helicopters. The Airmen formed up and began advancing on the village as they ruck marched through the snow along a road that led into the area. They reacted to enemy fire and communicated by radio as they pushed their way to the village.

Once in the village, teams of Airmen assaulted each of the buildings in search of combatants. As well as reacting to direct and indirect fire, they also used simulated air support from a Civil Air Patrol airplane supporting the exercise to suppress the enemy.

After a little more than two hours of battling in the village, the Airmen fought off the enemy and marched further down the road. Within a few minutes, the Chinooks landed and picked up the Airmen for the trip back to Hancock Field.

For Rossen, the real-life scenario; even at a slower pace ; helps Soldiers and Airmen alike gain familiarization and know what to do before they are presented with the real thing in combat.

“Better training you can do here equals better effects down range. The first time you see this stuff, you don’t want to be getting shot at while you’re seeing it,” he said. “Muscle memory, that type of deal. The more realistic training we can do here, the more effective we’re going to be down range.”

And though it was the first time the two units trained together, Rossen said the joint exercise provides a realistic situation because the Army and Air Force would work together in similar fashion for air assault missions in combat.

“We support the Army period. We support the ground force commander and his objectives,” he said. “If we don’t train with them, we’re never going to get a full understanding of what they’re looking for. This makes it as realistic as possible for us in the overall grand scheme of maneuvers.”