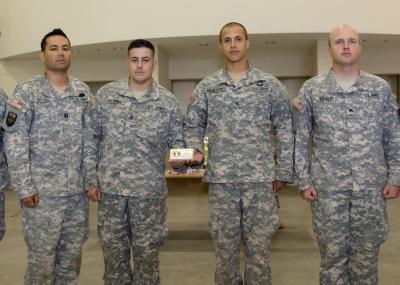 Instead at team from the 1st Battalion 69th Infantry walked away with the honors.

"We were confident this year," said Sicinski. "We didn’t cut corners; we knew that we had to exceed the standards of the match."

More than 90 Service Members from the New York Army and Air National Guard, New York State Guard, and New York Naval Militia competed during the annual three-day event in both individual and team events on 29-31 May, 2015.

This year’s TAG Match, which was conducted by the New York Army National Guard, had four courses of fire over three days. Each event tested the shooters’ skills at long range accuracy and their ability to quickly acquire and engage targets at close range.

Sicinski said he and his team prepared over the past year for the competition. The Fighting 69th knew that to win they would need to practice often and hard. The team members fired regularly, and wore heavier body armor to increase the difficulty of the training.

Sicinski attributed the win to keeping a firm hold of the fundamentals of shooting.

"Remember the basics," Sicinksi said. "Have a good winning attitude, try to have a good match, and trust in your equipment."