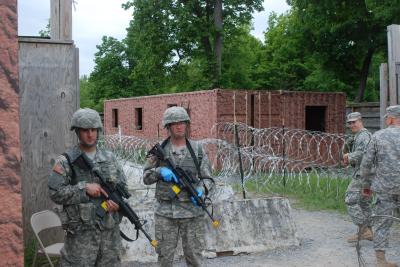 FORT DRUM--Guarding prisons is routine and it’s not glamorous. But it’s necessary and it could turn deadly.

Sixty Soldiers from the 102nd Military Police Battalion’s Headquarters Detachment spent their Annual Training here honing the skills they need to do the job well.

“What we are conducting here are full scale operations in order to bring everyone into the fold for what is necessary to run a detention facility properly,” said Capt. Nicholas Monuteaux, the Headquarters Detachment Commander. “It is very necessary to ensure all our military policemen and small engineer contingent develop, build or refine their duties and responsibilities,” he added.

Detainee operations is still a relatively new mission for his unit, Monuteaux said.

Fifty members of the battalion recently returned from a deployment at Guantanamo Bay Naval Base where they worked as part of Joint Task Force Guantanamo, conducting real-world detainee operations.

In 2012, the headquarters detachment received a change of mission to reclassify from the standard Military Police skill set to a more defined role in internment and resettlement. This means they are specialized to process, book and maintain detainees, he explained. “We must train as we fight, and the more realistic the training environment, the more focus our troops have,” Sgt. First Class Richard Reed said.

Reed, who is from Seneca Falls, said he would not have it any other way.

He is acutely aware of all detainees and all personnel operating at the detention facility from administrative processing to intelligence gathering and analysis to eventually cell block housing and the interpreters used fulfill those requirements, Reed said.

The detention facility training area at Fort Drum is a small-scale version of the facilities built in Afghanistan and Iraq. While those would house 60 to 100 detainees the Fort Drum version holds 21 simulated detainees.

While the facility is smaller than a real one, it takes the same skills to run it, Reed explained.

“You can’t have more detainees than you can handle because it is not just about being a jail keeper,” Reed said.

Indeed from the minute you arrive at the encampment area, there is noticeable security everywhere and by design, security not so noticeable.

“Having the many parts of the operation go right is critical to overall control of the detention area,” said Spec. Colby Taber, a Trumansburg, N.Y., resident.

“We have been very pleased with the training so far here at Fort Drum,” said Capt. Andrew Day the 102nd Military Police Battalion’s Assistant Operations Officer.

“Our footprint is quite large, consisting of motivated and dedicated Soldiers from Buffalo to Central New York who are giving their all and at the end of training that is something to be proud of and share,” he added.