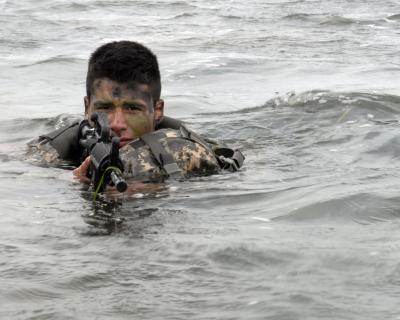 New York Army National Guard Spc. Anthony Jiordano, an infantryman assigned to Troop C, 2nd Squadron, 101st Cavalry Regiment, serves as one of his team’s scout swimmers during a training exercise in Buffalo Sept. 13. The training required scout swimmers to swim to shore to locate a landing zone and provide security while the rest of the team disembarks. (US Army National Guard Photo by Spc. Alexander Rector)

BUFFALO--Reconnaissance is all about stealth, and sometimes for the New York Army National Guard Soldiers of Troop C, 2nd Squadron, 101st Cavalry that stealth means getting wet.

The troop’s infantrymen did just that in Lake Erie on Sunday, Sept. 13 as the Buffalo-based unit tested their ability to insert scouts with the inflatable F470 Combat Rubber Raiding Craft, known as the “Zodiac.”

“We’ve had numerous training on the reconnaissance portions of the mission,” said Staff Sgt. Derek Vasquez, a scout team leader with Troop C, 2-101 Cav. “However, today we incorporated the actual insertion portion, along with preparing and crewing the Zodiac.”

The small lightweight Zodiac, able to be inflated in just a few minutes, is inherently stealthy, particularly when operated in low-light conditions.

“As a reconnaissance unit we have many ways of inserting into enemy territory,” said Vasquez. “If you’re trying to do a stealth approach and you have a waterway, a Zodiac is a good way to get a small, 10 person or less team into an area quietly.” Leading up to the open-water training, the unit spent several drills preparing for Zodiac operations.

“In August we did training out at the Erie Community College pool,” said 2nd Lt. Blakely Schirtz, the 2nd platoon leader with Troop C, 2-101 Cav. “We did a combat water survival test and took off our uniform blouses and trousers to create flotation devices.”

“Yesterday we were at the pool again and able to practice with the Zodiac, and we hit the open water today,” said Schirtz, a Rochester N.Y. resident.

During the training, the unit’s Soldiers were divided into teams, and were then given time to practice launching, crewing, and recovering the Zodiac in a real-world open-water environment.

Vasquez, as the scout team leader, acted as the boat commander and was positioned at the bow of the Zodiac. Through hand signals he relayed his commands to the coxswain at the stern who is tasked with steering and maneuvering the craft.

“We swam ahead to shore,” said Harris. “As soon as we got to land we pulled security and signaled to the boat that it was clear to come in.”

“I hope to keep doing stuff like this,” said Harris, a Tonawanda, N.Y. resident. “Some of the things you see on TV, you don’t expect to do in the real world.”

“When you actually do it for real in the field, you realize there are a lot of moving pieces and parts that need to come together to carry out the mission,” said Harris. “I feel like I can hold my head a little bit better on my shoulders now.”

On-scene to provide support for the training were Coast Guardsmen from Coast Guard Station Buffalo, who stationed a Response Boat offshore to deter civilian boat traffic from the training area and to provide rapid rescue response if needed.

“The Coast Guard was our security during the training mission,” said Vasquez. “They cover any type of civilian boat traffic that might come into the bay. They were incredibly pleasant and willing to help by assisting us in any way they could.”

As a reconnaissance unit, Troop C isn’t limited to one insertion method and is quick to employ different ways to get their troops to the fight.

“This is what Charlie troop is all about,” said Schirtz. “Just a few months ago when we were at Fort Drum we performed six different air assault missions. We need to be trained on different insertion techniques because the operational environment dictates how we can go in and what resources we use.”

“As a recon element we like to stay pretty slick. An assault pack, a weapon and a radio. But you want to stay combat effective whether it’s dropping a Zodiac off the back of a Chinook into the water, or getting out of a Blackhawk on top of a building, said Schirtz. “This is another thing we’re incorporating into our toolbox.”