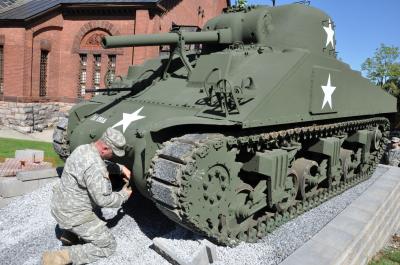 SARATOGA SPRINGS - What began as a task during his spare time, turned into a history lesson for New York Army National Guard Soldier Spc. Jonathon Bishop.

Bishop is a full time machinist and mechanic at the New York Army National Guard’s Maneuver Area Training Equipment Site, or MATES, at Fort Drum, N.Y.. For the last 22 months he and his team mates refurbished and repainted a World War II-era M4A3 Sherman tank destined for display at the military museum here.

Bishops role included researching and fabricating parts as well as painting the tank.

"We’re used to working on contemporary military equipment and vehicles so working on this project has been really cool and gave me a chance to learn a lot about the history of the tank while doing something different," said Bishop, a resident of Lowville, N.Y.

The M4 Sherman was the standard American tank of World War II. While not as well armed and armored as its German opponents the tank was fast, reliable and tens of thousands were built.

The tank was returned to the museum on Sept. 15 and now sits on a parking pad outside as a permanent public display.

"I’m glad it’s finally back, it should increase visibility and draw folks to the museum," said Courtney Burns, the museum’s director. "It looks spectacular, the extra items they added really add to the authenticity of the show piece. They went well above our expectations," Burns enthused.

The extra items refer to the tank’s basic inventory issue, or BII for short, which includes a mounted 50-caliber machine gun, ammunition boxes, axes and other tools.

The really interesting part of the project was scouring Fort Drum’s ranges for the hulks of old armored vehicles, which now serve as targets in the impact area, looking for parts, said Chief Warrant Officer Robin Steele, a MATES employee who supervised the project.

"We found old pieces on range targets at Ft. Drum, in warehouses and in some cases fabricated the parts we needed," said Chief Warrant Officer Robin Steele, a Carthage resident, who serves in Co. B, 427th Brigade Support Battalion.

"It’s a really good feeling to see this project completed, I would pass by this tank every morning in Carthage before the armory closed and it was moved to the Museum. We picked it up two years ago and to finally see it completed and on display is a really good feeling. It’s great to know that so many people will be able to enjoy it," Steele added.

The M4A3 "Sherman" tank was formerly a display piece at the New York State Armory in Carthage, N.Y. prior to the armory closure. The tank sat outside the armory for approximately 20 years.

"This piece has an iconic relationship with the Guard and is part of a larger effort to place historically appropriate vehicles and equipment at armories around the state that connect with a unit’s history," Burns said.

New York National Guardsmen served in vehicles like this in Europe during World War II and later on when they trained at Fort Drum in the 1940s and 50s, Burns said.

The tank is painted with the "bumper numbers" of a tank in A Company of the New York National Guard’s 191st Tank Battalion which fought in battles at Salerno and Anzio in Italy in 1943 and in southern France in 1944.

The mission of the museum and research center is to preserve, interpret and disseminate the story, history and records of New York State’s military forces and veterans. The collection is divided into the museum and the library/archives holdings.

"These restoration projects provide a unique maintenance training task for our Soldiers and help place historic vehicles on display at other military locations in New York, it’s a win-win," Steele explained.