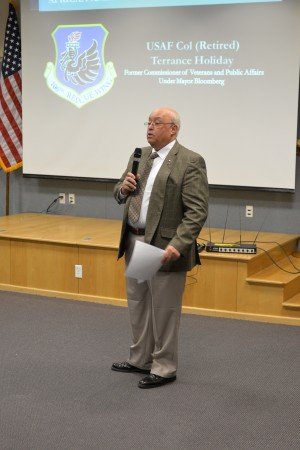 WESTHAMPTON BEACH, New York- Colonel (retired) Terrance Holiday talks about the importance of the 369th Infantry to the 106th Rescue Wing for the African American History Celebration, February 6th, 2016. Colonel Terrance Holiday, who had one uncle who served with the famed Tuskegee Airmen-the all black 332nd Fighter Group-during World War II, and another who fought with the 369th Infantry, the Harlem Hellfighters, during World War I, told wing members that there is so much more to learn concerning the roles that African Americans played in the military.

WESTHAMPTON BEACH, NY- African Americans have long fought for their country, but their contributions are too often overlooked, a retired Air Force colonel, and former head of the New York City Office of Veterans Affairs told members of the 106th Rescue Wing DAY AND DATE HERE.

Colonel Terrance Holliday, who had one uncle who served with the famed Tuskegee Airmenrdquo;the all black 332nd Fighter Grouprdquo;during World War II , and another who fought with the 369th Infantry, the Harlem Hell Fighters, during World War I, told wing members that they should learn more about the role black Americans have played in the military.

The purpose of National African American History Month in February is to highlight contributions African Americans have made throughout the history of our country, their struggle for freedom and equality, and to deepen the understanding of our own history as a nation. According to Senior Master Sergeant Lindsay Cunningham, the wing Human Resources Advisor, the 106th Rescue Wing Diversity Council has presented a program to members in observation of the month for some 20 years.

New York City dancers, Instruments of Praise Dance Troupe and singers of the Harlem Renaissance Choir, named in homage to the cultural, social, and artistic revival that took place in Harlem in the 20s and 30s, performed for wing members.

The Harlem Hell fighters ldquo; originally the 15 New York National Guard -- spent more combat time in World War I than any other American unit. Despite their dedication, courage and sacrifice, unit members returned home to face continued racism and segregation from their white military counterparts and fellow countrymen.

He specifically spoke about Harlem Hell fighter, Sergeant Henry Johnson. Along with his unit, Johnson was brigaded with a French army colonial in front-line combat. Johnson was awarded the French Croix de Guerre avec Palme, the highest award for valor in France.

Upon completion of his tour and return home, the undecorated Johnson was unable to continue his prior work as a porter due to 21 combat injuries, and died at 37 in 1929. The United States posthumously awarded Johnson the Purple Heart in 1996, the Distinguished Service Cross in 2002 and the Medal of Honor in June 2015.

“The presentation was received very positively by the base community,” Cunningham, said. “It’s important to remember African American history is also American history. Everyone should be knowledgeable about those who came before us,” added Cunningham