November 24, 2020 | 4:22 pm Information on Novel Coronavirus
Coronavirus is still active in New York. We have to be smart. Wear a mask, maintain six feet distance in public and download the official New York State exposure notification app, COVID Alert NY.
Get the Facts 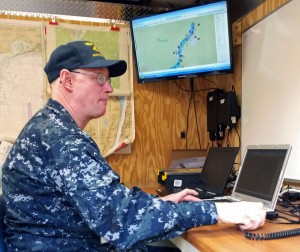 Chief Petty Officer Bob Morisseau of the New York State Naval Militia (NYSNM) tests a newly-installed computerized automatic identification system aboard the NYSNM’s upgraded mobile command post at the New York Army National Guard armory here on March 10. The system and computerized map displays real-time information on boat traffic in whatever New York state waterway the militia is operating in. Militia members, New York Guard members and New York Army National Guard communications experts also tested the command post’s newly-installed radios here on March 10 and 16. The new features will improve the NYSNM’s ability to communicate and coordinate with New York National Guard units. The NYSNM and the New York Guard are part of the New York State defense forces and can be mobilized for state-active duty, as was the case during Hurricane Sandy in 2012. The NYSNM is the naval component of the New York State defense forces. Morisseau is from Albany, N.Y. (photo courtesy of NYSNM/released)

Militia members and other personnel tested the command post’s radios and computers systems here on March 10 and 16. The militia is the naval component of the New York State defense forces and can be mobilized for state-active duty, as was the case during Hurricane Sandy in 2012.

The command post is built into a 16-foot trailer that the militia acquired in 2009, according to Cmdr. Donald McKnight, who leads the militia’s Military Emergency Boat Service. The upgraded command post is now equipped with a large-screen computerized map that displays real-time information on boat traffic in whatever New York state waterway the militia is operating in.

In addition to its great range, the high-frequency radio can communicate over and around hilly territory like the area around Camp Smith Training Site in Cortlandt Manor, N.Y., where the militia sometimes operates from, McKnight said.

“It’s like a ham radio,” he said. “You can talk around the world, in theory.”

Militia members pinpointed radio communication issues during Hurricane Sandy, McKnight recalled. The range of the marine radios aboard their boats and mobile command post is limited, and during the hurricane, militia members operating at Camp Smith couldn’t communicate by radio with members based at Floyd Bennett field in Brooklyn, he explained.

What’s more, many boats, including pleasure craft, are equipped with marine radios, he explained. That meant that militia members couldn’t communicate securely, and had to contend with all the other marine radio traffic, he said.

"That’s the radio that every boater has," he said. These problems got them thinking about a more advanced command post, he added.

Then in 2013 and 2014, they acquired some trucks from New York National Guard’s Joint Task Force Empire Shield, McKnight recounted. The trucks, as it turned out, were equipped with dual-band VHF radios that operated on emergency-responder frequencies, he said.

“We basically went out and scrounged the radios from the trucks and put them on the boats,” McKnight said.

The improvements will also give the militia greater flexibility during their Rapid Gunwale event, an emergency-response exercise that’s scheduled for June, he said. The exercise scenario calls for militia members to respond to a simulated oil spill in the Hudson River, McKnight said.

The militia will be coordinating with the Coast Guard during the exercise, while the militia’s boat handlers will be out on the water, working with several law-enforcement agency boats and crews to form a safety and security zone around the mock oil spill, he said. This prevents civilian boaters safe by preventing them from straying into the oil spill, he explained.

That’s where members’ boating skills come into play, he stressed. The exercise will also test the militia’s ability to mobilize, and command and control their personnel -- to include moving two of their boats to launch sites, he added.

While their boat handlers are skilled, towing their large boats and trailers down two-lane country roads and through small towns with narrow intersections may be a bigger challenge, he said.

"People don’t have appreciation for towing a boat," he said. "It takes practice."

The exercise will also challenge the re-supply capabilities of the militia’s Expeditionary Logistics Support Team and the first-aid skills of its medical group, he said.

But with the improved command post, the militia is now better prepared for the exercise and state emergencies, McKnight said.

"It’s still a work in progress," he said. "But we’ve come a long way to improve the capabilities of the command post," he said.