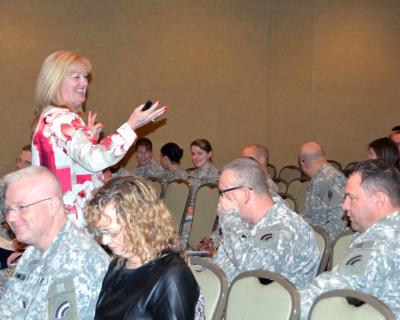 The 2-day Yellow Ribbon reintegration event focused on teaching techniques to Soldiers of the 42nd Infantry Division, based in Troy, N.Y. to deal with problems and concerns that may crop upon their return from a deployment to civilian life.

Also on hand were information providers in a variety of areas, including veterans’ benefits, education, insurance, financial and legal benefits and employers looking to hire experienced military personnel.

The sessions were held in a relaxed, non-military environment, to provide Soldiers and families a chance to share experiences and talk frankly with each other and counselors about their experiences.

According to Willsey, this concept began as a cost savings initiative championed by New York and is now a template for other states.

“We believe this process is more convenient for our Soldiers and their families and will become the standard practice for future National Guard deployments,” Willsey said.

“I like it and it makes sense,” said Sgt. 1st Class Cesar Ramirez from Queens, N.Y.

“Having the 30/60 day events combined gave me more time at home with my family before I had to travel again. This is my second Yellow Ribbon with the Guard and I got just as much out of this as the first time in 2012,” Ramirez added.

Another change is the addition of hands-on interactive presentations from experienced speakers from the Yellow Ribbon Cadre Speakers program, according to Willsey.

“This gives our Soldiers and families a fresh perspective on dealing with transition issues,” said Willey.

Janell Coker from Carlisle, Pennsylvania is a facilitator with the program and a military spouse who has experienced several deployments. Coker spends 1-2 weekends a month helping combat veterans and their loved ones transition back from deployments.

“We help military personnel and their families develop tools to balance responsibilities and manage expectations and at the same time effectively communicate with each other,” explained Coker.

This is done through a series of presentations such as “Finding the Balance”, “How I See It” and “Keep Communication Going”.

“This is a great opportunity for the New York National Guard since the Office of the Secretary of Defense provides this service to us at no cost and I think our families can relate better to a civilian speaker who has been through deployments as a spouse and knows firsthand some of the issues they’ve been through and will face in the near future,” said Willsey.

The Yellow Ribbon Cadre Speakers program has 50-60 vetted speakers from a variety of backgrounds who provide presenters, motivational speakers and facilitators to all service branches.

“The interaction was great and really had an impact,” said Ramirez. “I remember a lot more when getting up and being involved in the presentations rather than just sitting through power point,” Ramirez added.

Ramirez is assigned to the 42nd Infantry Division Signal Co. and returning from his fourth deployment.

The Soldiers of the 42nd Infantry Division deployed to Guantanamo Bay Naval Base, Cuba, or GITMO in April 2015. They served as members of the headquarters element for Joint Task Force Guantanamo, and provided administrative support to the task force.

The team of enlisted Soldiers, non-commissioned officers and officers staffed the personnel, operations, logistics, and signals sections of Joint Task Force Guantanamo, which is charged with overseeing detainee operations at the naval station.