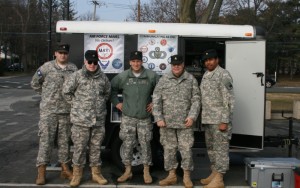 GARDEN CITY, NY ldquo; On Saturday, 21 January 2017 members of the New York Guard’s 88th Brigade, 14th Battalion Commo Team conducted a MERNEX (Military Emergency Radio Network Exercise) to maintain and enhance their proficiency and readiness in MERN operations. The exercise concentrated on the Commo Team’s ability to install, operate and transmit voice messages and the primary exercise objective of passing digital messaging over HF radios from both a fixed station and deployed mobile stations in the field.

After the installation and setup of the mobile units were completed, the operators immediately began to successfully establish voice communications with both the fixed and mobile stations. SITREPs were sent and received by all stations. The degree of reception from the participating stations varied from weak to loud and clear.

Following the initial voice communications section of the exercise, the operators began passing digital transmissions with the participating stations. SITREPs via digital transmission were successfully established with all stations reporting in. The ability to pass and relay digital message traffic between stations, when previous voice communication proved to be intermittent, was successful and established the value of having a secondary High Frequency (HF) communication system available with operators fully knowledgeable in its use.

After the successful MERNRX was completed, and all stations and equipment were stowed and prepared for future use, SFC Martino conducted a debriefing of the exercise with the Commo Team. They discussed and reviewed the exercise in preparation for future exercises and for readiness to deploy and operate the MERN mobile and fixed units for future New York Guard missions.

The Military Emergency Radio Network (MERN) was established to provide the ability for New York Guard units to communicate effectively during disaster response and its assigned missions. The Military Auxiliary Radio System (MARS), which is a program operated jointly by the United States Army and United States Air Force with a mission objective to assist, and provide local, national and international communications in support of United States Military and the New York Guard, is staffed by volunteer civilian Amateur Radio Operators and active duty military personnel. MARS works hand-in-hand with MERNS to assist in maintaining a robust emergency communications network.