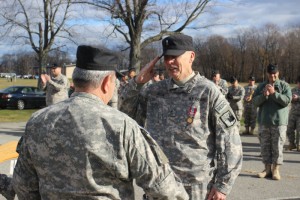 Above: WO1 Green (right) is presented with the Meritorious Service Medal by COL DeSimone (left), Acting Commander of the New York Guard. ( Capt. Mark Getman)

CAMP SMITH TRAINING SITE, CORTLAND MANOR, NEW YORK �“ On 03 December 2016, Somers resident, Paul Green, a WO1 (Warrant Officer 1) in the New York Guard, was awarded the New York State Medal for Meritorious Service Award from the New York State Division of Military and Naval Affairs for his heroic actions responding to a dangerous and potentially life threatening auto accident in the Town of Somers.

On 11 June 2014, Green, who is also a volunteer member of the Somers Fire Department, responded to a motor vehicle accident with multiple personal injuries reported. Upon arriving at the scene, Green assessed the situation and immediately began rendering assistance to the passengers. At the time of the incident smoke was emanating from multiple points of the car and passengers had sustained serious injuries. Green was able to stabilize the first passenger and remove him from the car preventing further injury.

After extricating the first passenger Green found another victim who was in respiratory distress and non-responsive. WO1 Green, along with fellow firefighter Kevin McDonald log-rolled the victim on her side and Green performed several fingers sweeps removing large blood clots from the victim. These procedures allowed the victim to return to normal respiration and allowed her to be transferred to Westchester Emergency Medical Services. The incident commander Captain Jonathan Mackey stated, “ that all victims…are alive due today in part due to the efforts of Firefighter Paul Green.”

WO1 Green credited his training as a nurse, emergency medical technician, firefighter and New York Guard member for having the skills necessary to assist those in harm’s way. Green went on to say, “You need to train as if someone’s life depends on it because it will”.