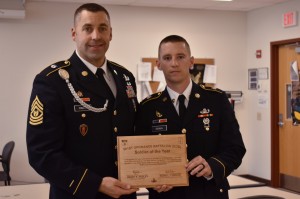 Glenvillerdquo; An early morning start and cold wind didn’t stop five Soldiers competing to be the Best Warrior from the 501st Ordnance Battalion on October 22nd, 2017.

When it was all over, Spec. John Iseman, a member of the 1108th Ordnance Company (Explosive Ordnance Disposal) was tapped to represent the battalion at the next level of Best Warrior competition.

“The physical part was what I was very confident on,” Bulkowskit said. “I was fine on the PT test, and it was the ruck march that got me and ever since then I’ve been much drained.”

Bulkowskit finished the Ruck march in an hour and thirty nine minutes.

The second part of the competition was demonstrating knowledge of Soldier tasks, which included leading a squad, conducting first aid, Nuclear/Biological/Chemical contamination response, hand and arm signals, disassembly and reassembly of a M249, and making radio calls.

Each soldier had twenty minutes to complete each task.

The final tasks of the day were a board of review and a written exam. The Soldiers were asked questions ranging from Army National Guard Regulation to current events.

“A lot of these tasks we don’t do on a regular basis” Iseman said. “So it’s a good structure to improve on our Soldier skills. Next we’ll be going to the Brigade level competition, and we’ll win.”