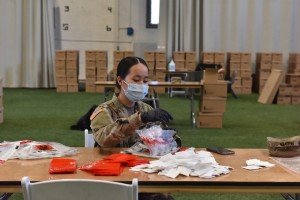 ALBANY-- The job doesn’t look dramatic, but 30 New York National Guard Soldiers and Airmen working at tables and packing boxes in an old armory are fighting the coronavirus pandemic.

The Soldiers and Airmen are assembling COVID-19 test kits for the New York State Department of Health’s Wadsworth Lab. The kits are shipped to ten test sites being run by the state and to other locations across New York as well.

They are part of force of 3,500 National Guard Soldiers and Airmen currently on duty as part of New York’s response to COVID-19.

Wadsworth Lab has developed a new, less intrusive COVID-19 test that is done through a saliva sample and a self-administered short nasal swab, according to the New York State Department of Health.

The information these tests reveal let a person know if they have the COVID-19 coronavirus. That information helps doctors determine treatment for that individual.

Testing is also needed to help determine when the state’s current pause in public gatherings, schools, colleges and normal workplace and retail activity can end, according to Gov. Andrew M. Cuomo.

The National Guard’s role in putting together test kits originally began in the lab building itself and with far fewer people. As the number of test components available increased, the process was moved to the former New Scotland Avenue Armory in Albany, which is now owned by the Sage Colleges.

“The Guard is helping us out with trying to get as many kits out as we can,” said Alexis Tripodo, a state employee of the Division of Homeland Security and Emergency Services, who is responsible for shipping completed kits.”They are helping out tremendously with the speed of the completed kits and make sure it’s accurate, making sure every bag is packed correctly.”

“Everybody is really happy to be here,” said Army Spec. Justin Farber, a member of Delta Company of the 152nd Brigade Engineer Battalion. “ We’re doing our part. Everybody is happy to help their communities and give back.”

The Soldiers and Airmen set up an assembly line process, but it is still, slow, exacting work, he added.

“Each station adds their part, then hands it over to the next station,” he said.

Technical Sgt. Jeremy Maxon, a flight engineer from the 109th Airlift Wing, who was working with Senior Airman Johnathan Magaletti from the wing’s 139th Aeromedical Evacation Squadron and Staff Sgt. Josh Kazer, from the 109th Fuels Management Flight, outlined the process at his work station.

There is an outer biohazard bag to the where all the pieces of the kit go, he said. There is an inner bag where the documentation for the kit goes.

Then in go the viles, swabs, and pads which are part of the kit, Maxon said. The assembled kits are packed in boxes of 100.

When he and the other Airmen and Soldiers on the test kit team stepped up to be part of the COVID-19 response, they did not know where they would be working, Maxon said.

But they are all proud of doing this mission, he emphasized.

“We got the tasking to come here and it feels good being able to help out”, Maxon said.