The 42nd Infantry ( Rainbow) Division's history as a unit began with America's entry into World War I. Amidst the rush by America to mobilize, individual states competed with each other for the honor to be the first to send their National Guard units to fight in the trenches of Europe. To check the negative implications of this competition and to minimize the impact the mobilization could have upon any one state, the government decided to create a division composed of hand picked National Guard units from 26 states and the District of Columbia. As a result of this unified effort, the 42nd Infantry Division was born in August and organized in September 1917 at Camp Mills on Long Island, New York.

Colonel Douglas MacArthur, who had been instrumental in the forming of the Division, said shortly after its completion. "The 42nd Division stretches like a Rainbow from one end of America to the other."

The 42nd Division arrived in France in November 1917 and entered the front line in March 1918, where it remained in almost constant contact with the enemy for 174 days. During its time in France, the 42nd Division participated in six major campaigns and incurred one-out-of-sixteen casualties suffered by the American Army during the war. The 42nd Division's service officially came to and end in May 1919.

With the onset of America's participation in the Second World War, the 42nd Division was reactivated. At the July 1943 reactivation ceremony, the new division commander, Brigadier General Harry Collins echoed MacArthur's sentiments on the 42nd Division's unique status when he said, "The Rainbow represents the people of our country."

The 42nd landed in France in December 1944 and as part of the 7th Army, advanced through France and entered Germany in March of 1945. It was during the 42nd Division's rapid advance through Germany in April 1945 that they, along with the Guard's 45th Infantry Division, liberated the infamous Dachau concentration camp.

By the end of the war, the 42nd Division had established an enviable record. It was first in its corps to enter Germany, first to penetrate the Seigfried line and first into Munich. Rainbow soldiers had seized over 6,000 square miles of Nazi held territory during their march across Europe. The Division ended the war serving as occupation forces in Austria and was inactivated in June 1946.

The 42nd Division returned to its roots as a truly diversified division in 1993 when it consolidated with elements of the 26th and 50th divisions to form one National Guard Division. The division now has units in eight different states, including New York, Vermont, New Jersey, Massachusetts, Rhode Island, Kentucky, Florida and Illinois. Michigan will join the Rainbow Division in 2004.

Division soldiers have repeatedly responded to local needs during emergencies with more state active duty missions in the 1990s than ever before in the Rainbow's history. The division participated in the northeastern states' disaster response for blizzards and floods in 1996, fires in 1997, the devastating ice storm and New York's tornado recovery in 1998, and the Y2K contingency and snowstorm and hurricane responses in 1999 and 2000. 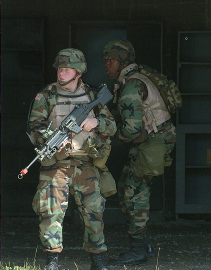 In 2004-05, the 42nd Infantry Division Headquarters and base units were mobilized and deployment in Iraq in support of Operation Iraqi Freedom III.

Today, the soldiers who wear the famous 42nd Infantry patch continue the Division's long-standing tradition of service to nation, state, and community.