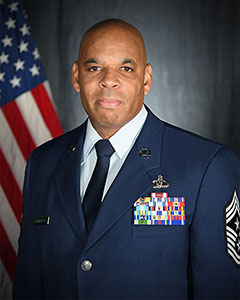 Chief Master Sergeant Denny L. Richardson is the Command Chief of the New York Air National Guard. As the Senior Enlisted Advisor/Command Chief, he serves as the advisor to the commander and senior leaders on matters influencing the health, morale, welfare, quality of life, professional development and effective utilization of enlisted personnel assigned to the New York Air National Guard.

Chief Richardson entered the Air National Guard in 1989 and completed Basic Military Training. He graduated technical school as an Aircrew Life Support Specialist and was assigned to the 135th Airlift Squadron in Baltimore, Maryland.

He immediately volunteered and became a member of the Base Honor Guard for 175th Airlift Wing in Baltimore, Maryland. In this position his talents were recognized and he was assigned as trainer for the Base Honor Guard. In March of 1997 he accepted a position as NCOIC of Aircrew Life Support for the 139th Airlift Squadron, Scotia, New York. Chief Richardson has deployed on several occasions in support of Operation Deep Freeze to McMurdo Station, Antarctica, and in support of Operation Desert Storm and Operation Enduring Freedom. In June of 2003 he was selected as Aircrew Life Support Superintendent for the 139th Airlift Squadron where he led the team through a series of successful inspections receiving recognition from AMC Inspector General.

Chief Richardson volunteered as a member of the 109th Mission Support Group Base Honor Guard. He graduated from the United States Air Force Honor Guard Protocol Honors and Ceremonies training course in May of 2002. Upon being selected as the Base Honor Guard Superintendent in 2008 he incorporated numerous changes. He immediately initiated a revised training record program to better track team member’s experience level, established regular trainings and scheduled quarterly meetings with wing leadership. His financial management experience resulted in efficiencies that doubled the team’s existing budget. Under his supervision, the team, comprised of four Title 10 full-timers and a core group of 30 volunteers performed 2,200 man hours and traveled 16,500 miles annually.