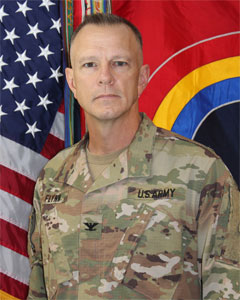 Colonel Sean Flynn is the Chief of Staff of the Troy, New York-based 42d Infantry Division (42d ID). His past assignments include leadership and senior staff positions throughout the 42d Infantry Division, including rifle platoon leader; rifle company commander; and infantry battalion commander.

Prior to his current assignment, COL served as the operations officer (G3) of the 42d Infantry Division, as executive officer of the Syracuse-based 27th Infantry Brigade Combat Team, and as commander of the Manhattan-based 1st Battalion, 69th Infantry, the “Fighting Sixty-Ninth.”

COL Flynn has served on active duty with the New York Army National Guard since 2001. Prior to joining the National Guard, COL Flynn worked in New York as a financial communications and public relations consultant from 1997 - 2000 and as a Public Affairs Officer for the U.S. Air Force from 1994 - 1997.

COL Flynn earned his commission in 1994 through the Air Force Reserve Officer Training Corps. He holds a Master’s in Strategic Studies from the US Army War College and a Bachelor’s of Arts in Journalism from the University of Maryland at College Park. He is a graduate of the Infantry Officer Basic and Advanced Courses, the US Army Command and General Staff College, the Department of State’s Afghanistan Field Orientation Course, and the Department of Defense’s Joint Public Affairs Officers Course.

COL Flynn is the author of The Fighting 69th: From Ground Zero to Baghdad (Viking 2008), a narrative non-fiction account about the evolution of the National Guard from a strategic reserve to an operational force in the wake of the attacks of September 11, 2001. He resides in Albany, New York, with his wife Lori and their two children.