March 28, 2020 | 3:36 pm Information on Novel Coronavirus
Governor Cuomo has put NY State on PAUSE: All non-essential workers are directed to work from home, and everyone is required to maintain a 6-foot distance from others in public.
Get the Facts 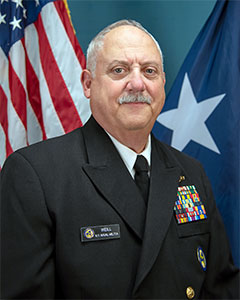 Captain Weill graduated with a Bachelor’s Degree in Biology from Hartwick College in 1977. He completed a Master’s Degree in Instructional Design from Rochester Institute of Technology in 1994.

Captain Weill is a 1982 graduate of Officer Candidate School. He qualified as a Surface Warfare Officer in 1985, and has held a variety of sea and shore assignments since 1982.

In 1986, Captain Weill left Active Duty and immediately became a member of the Selected Reserve. He was assigned to NR AOR-6 USS KALAMAZOO, where he served successive tours as Executive Officer and Commanding Officer. During this tour, he earned his qualifications as a Tactical Action Officer onboard USS LAWRENCE (DDG-4).

In 1998, Captain Weill assumed command of NR ASSAULT CRAFT UNIT TWO DET 205 in Buffalo, NY. The unit owned and operated LCU-1680, one of only two such landing craft in the Reserve inventory. During this tour, the unit won two more CAPT Leo V. Bilger Awards.

In 2000, Captain Weill was assigned to NR US Joint Forces Command 206 in Norfolk, VA, where he served in successive tours as Training Officer and Chief Staff Officer. In 2003, Captain Weill became Commanding Officer of NR COMNAVSURFGRUMED 105, providing direct mission support to COMFAIRMED in Naples, Italy. During that time, he was assigned the mobilization duties of Deputy Commander, Task Force 63.

Captain Weill is married to the former Patricia Muskopf of Stafford, NY. They have two daughters, Kelly and Erin.