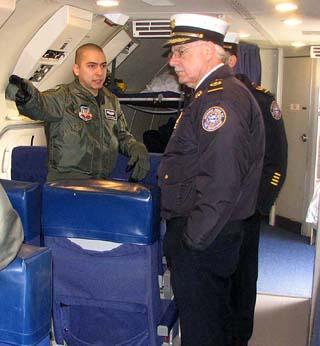 ROME, N.Y. - An E-3 Sentry Airborne Warning and Control System, or AWACS, aircraft from the 552nd Air Control Wing based at Tinker Air Force Base, Okla., landed at the Oneida County Airport in Rome, N.Y., for integration training with controllers at the Northeast Air Defense Sector Monday.

"Both NEADS and the AWACS have unique radar capabilities that can be linked to each other so that information between the two can be shared during operations," said Maj. Jim Maunsell, NEADS chief of standards. "This training allows operators from both the sector and AWACS to better understand the capabilities the other has and to be able to integrate this knowledge to improve operations."

The AWACS aircraft are heavily focused on operations in overseas; however, it is important for the aircrew to be aware of the missions of the North American Aerospace Defense Command and the U.S. Northern Command.

"Overall, this was a great training opportunity to interact with our counterparts at NEADS," said Master Sgt. Scott Mills, operations superintendent for the visiting AWACS aircrew. "We were able to perform every aspect of training like surveillance, fighter control, air-to-air refueling. Also, we’ll be able to take back to the operational wing at Tinker what we learned training here."

The aircrew was impressed with the support provided by the Oneida County Airport as well as in the local community, said Sergeant Mills.

"Every part of this visit was truly a great experience - the support provided by the Oneida County Airfield was outstanding and the community was extremely friendly and welcoming to the aircrew," said Sergeant Mills.

The firefighters were provided valuable first responder training by the AWACS crew as well.

"We enjoyed being able to tour the aircraft," said Rome Fire Department Chief Roger Sabia. "Hearing about the AWACS mission was very interesting and the size of the aircrew was also surprising as well."

The ground-based unit at NEADS performs a year-round 24-hour NORAD air defense and homeland defense mission, and it supports both NORAD and NORTHCOM mission areas.

The aircrew visiting the Griffiss area is part of a wing based at Tinker that provides combat-ready theater battle management forces at the direction of the Chairman of the Joint Chiefs of Staff. It operates and supports these forces worldwide ensuring combat capability for all peacetime and contingency operations. The wing is comprised of three groups: The 552d Operations Group, the 552d Maintenance Group, and the 552d Communications Group, according to the wing fact sheet.