About the Division of Military and Naval Affairs 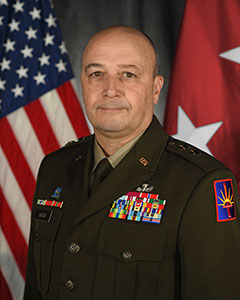 The New York State Division of Military and Naval Affairs (DMNA) is the state’s executive agency responsible to the governor for managing New York’s Military Forces, which consists of nearly 20,000 personnel.

The agency and military forces are led by the adjutant general.

Major General Ray Shields, the Adjutant General of New York, has a dual role as an appointed employee of NYS, and a federally recognized and active drilling general officer in the New York National Guard.

The agency reports to the executive chamber as part of the governor’s Public Safety team.

The adjutant general is responsible for agency administration as well as training, personnel, equipment and facility readiness for all of New York’s Military Forces.

This includes ensuring Army and Air National Guard elements are ready to deploy on federal missions at the direction of the president of the United States and deploying New York Military Forces on state missions when directed by the governor.

DMNA has direct responsibility to maintain and secure more than 50 installations across the Empire State. These installations are state owned or federally licensed properties which include air bases, armories, armed forces readiness centers and other logistical and training sites.

DMNA’s executive offices are located at 330 Old Niskayuna Road, Latham where state and federal staff work side by side to manage military readiness at the governor’s direction.

DMNA also provides trainers who work with the Department of Homeland Security and Emergency Services to implement the Citizen Preparedness Corps through which residents across the state are provided instruction in how to prepare for emergencies, survive them and recover.