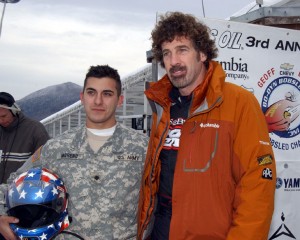 Lake Placid, NY -- Going from zero to 60 miles an hour in less than 60 seconds down a bobsled run was an adrenaline rush Cpl. Adam Barber has not experienced since leaving the streets of Iraq in 2005. Barber, along with 46 New York Army National Guard recruiters and new recruits joined veteran NASCAR and National Hot Rod Association race drivers Jan. 5, for the third annual Bo-Dyn Bobsled Challenge at the Mount Van Hoevenberg, US Olympic Sports complex.

This year’s challenge marked the second time Hall of Fame NASCAR driver Geoff Bodine invited National Guard Soldiers to participate in this event. A former National Guard Soldier himself, Bodine wanted to recognize the young men and women serving in the New York National Guard. “They’re doing a great job and its important to remind Americans that if it weren’t for what they and the rest of the military are doing to protect our country, we wouldn’t be able to do what we do,” said Bodine, adding “I’m extremely proud of what they do; they’re hero’s.”

“This was an awesome experience. We were able to meet all these drivers and our new recruits were able to practice hands-on the skills they have been learning,” Barber said.

Because of his size and weight, Barber was selected as brakeman for reigning NHRA Pro Stock champion Jeg Coughlin Jr. The pair took third place in the challenge. "Having Adam and the rest of these brave young men and women with us is an honor," Coughlin said. "I think they had as much fun as we did and they sure showed their bravery riding along with a bunch of rookie drivers.

Geoff Bodine created the Bo-Dyn Bobsled Project Inc. after watching the U.S. team race in the 1992 Albertville Games in European-built sleds. Bodine’s goal was to ensure U.S. sleds would be made in America, and his efforts have helped provide sled designs involving NASCAR technology.

“This has been an experience of a lifetime for all the Soldiers here,” said Moreno who is assigned to the Army National Guard’s Mobile Recruiting team. Moreno helps local recruiters during events and has seen a tremendous transformation with the RSP since he was in the program two years ago.

“We learned the basic skills when I went through the program and now these Soldiers have the chance to practice what they learn by participating in events like this,” Moreno said.

In the three years this unique event has taken place, Said has won five of six races. “It’s an honor to have Moreno as my brakeman,” he said. “It takes a lot of courage to serve all over the world protecting us so we can do this. It’s probably safer to go to Iraq and fight terrorists than to get into the back of one of these bobsleds,” Said added. This was a capstone event for training conducted in December and January for these new Soldiers in the Recruit Sustainment Program. Prior to the event, the new Soldiers executed training on team building, cold weather survival training, and first aid. Their participation in the bobsled event was hands-on application. “The bonus was finding out that good things come to those who train hard,” said Major David Palmieri, regional recruiting officer.

“When they arrived to help out a great cause, they not only met NASCAR, NHRA racers and Olympic bobsledders, they were able to serve as brakeman for the event,” Palmieri added.

“I chose the medical field since it is something I can use in my civilian life to help others,” Gower said.

When offered the opportunity to participate in this event as a sled handler she jumped at the chance and never imagined she would be selected to ride as a brakeman. “This has been a great experience meeting the NASCAR drivers and I know it is something I never would have had the chance to do if it weren’t for the National Guard.”