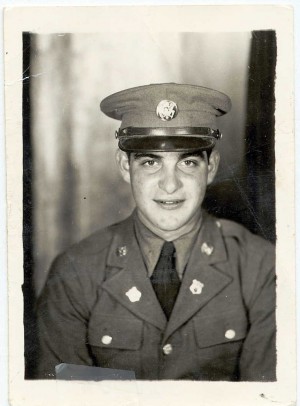 Nick Grinaldo, as a member of the New York Army National Guard’s 105th Infantry Regiment who fought in Saipan During WWII Circa 1940. Photo courtesy of New York State Military Museum

“This is the type of American that makes those of us that wear the uniform today proud to carry on the tradition of honor, bravery and courage,” Taluto said. “It is guys like Nick and (fellow veteran) Sammy Dinvoa and others who have done so much to preserve our freedom in the past and we are here to do it in the present.”

“Of my five years on active duty, going through Saipan was the worst, “Grinaldo recalled.

The New York State Conspicuous Service Star was created in 1998 to recognize New York residents who served on federal active duty in military units which received some type of unit recognition. The medal is available to any New York state resident who can prove their unit earned such as award.

Grinaldo first applied for the medal in 2001. But his records didn’t indicate that he had earned the right to the Presidential Unit Citation. His request was denied.

But Wayne Clarke, a staff member at the New York State Military History Museum, who had recorded Grinaldo’s story for the state’s Veteran Oral History program, decided to fix that.

At the close of World War II, the records keeping process was often not the best as hundreds of thousands of Soldiers were demobilized, Clarke said. He tracked down the historical documents that proved Grinaldo had been a member of Company C at the time of the award. Then he walked the veteran Soldier back through the process.

Company C of the New York National Guard’s 105th Infantry Regiment, a part of the 27th Infantry Division, won the Presidential Unit Citation for its actions on July 7, 1944 when those Soldiers, and other members of the 105th Infantry, defeated the largest Japanese Banzai attack of World War II in the Mariana Islands. About half the members of Co. C were from the Troy, Watervliet and Wynantskill, New York area at the time of the action, Grinaldo said. It was a tight-knit, home town unit.

Three members of the 105th regiment, including two Soldiers from Troy-Lt. Col. William O’Brien, and Sgt. Thomas Baker-received the Medal of Honor in that action. Grinaldo, a platoon sergeant, received a machine gun bullet in the right shoulder and shrapnel in his hip. The third award recipient, Capt. Benjamin Salomon from Milwaukee, Wisconsin, received his award posthumously in 2002.

“We were getting shelled pretty good by our own artillery,” Grinaldo said. “They wanted to break up the Banzai charge and they didn’t know we were holed up at the point we were.”

Grinaldo also rescued Dinova, wounded from enemy fire, from a precarious position on the beach. In 2004 he received a Bronze Star in recognition of his heroism.

Grinaldo thanked Clarke for the effort he put in, getting him the medal. He was mad that he didn’t get he medal the first time he applied, which made getting it now so much better, Grinaldo said.

Grinaldo enlisted in Company C of the 105th Infantry Regiment in 1940 at the suggestion of the brother of a girl he was dating at the time. “He got two bucks to sign me up, Grinaldo said.

When Grinaldo enlisted in his local National Guard company America was at peace. In August 1940 Congress authorized President Franklin D. Roosevelt to mobilize the National Guard for 12 months of training. The 105th Infantry left for Fort McClellan Alabama in October 1940.

As war drew nearer the National Guard’s federal status was extended and after the attack on Pearl Harbor the 27th Division and the 105th Infantry wound up in Hawaii in early 1942. The regiment and the 27th Division would go on to serve in the Pacific as one of the longest serving National Guard combat units during World War II.

It was there that Grinaldo had his most memorable experience with Lt. Col. O’Brien, his battalion commander, who died fighting to prevent his position from being overrun on July 7, 1944.

The unit was training on Bangalore torpedoes, a pipelike explosive device designed to clear barbed wire barriers and minefields, Grinaldo recalled. He was working to push the torpedo through a barbed wire barrier, when he heard O’Brien’s voice behind him.

“Well, if you can’t push that thing harder than that, I am going to push it right up your rump,” he remembered O’Brien saying. “Those ain’t the words he used, but that’s the nicest part of it,” Grinaldo said smiling.

“That was the way he was. He was one great officer,” he added.

The 105th Infantry Regiment is one of the most storied units of the New York Army National Guard, Taluto said.

Although the infantry regiment has since deactivated, the history and colors of the 105th Appleknockers continues as part of the 105th Ordnance Battalion (Explosive Ordnance Disposal), based in Schenectady, New York.

Hearing Major General Taluto say that he and the other World War II veterans made today’s Soldiers proud was especially rewarding, Grinaldo said.