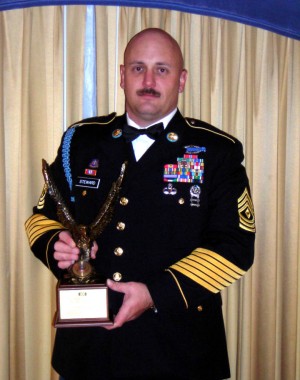 First Sergeant Troy Steward received the Top Soldier award at a gala and gold medal award dinner at the Grand Hyatt Hotel in Manhattan on December 6, at which the Chairman of the Joint Chiefs, Admiral Mike Mullen and Mr. David Shedlarz, Vice Chairman of Pfizer, Inc. were also honored.

The USO annually presents George Van Cleave Military Leadership Awards to a member of each service branch as a way of publicly recognizing "outstanding commitment, exceptional service, sacrifice and achievements of individuals who have shown extraordinary dedication to their country." Recipients are honored for their selfless commitment to service and the inspiration they instill in their comrades, military families, and the American people.

First Sergeant Steward is a traditional (part-time) Guard member with previous active duty experience. He has long served in the New York Army National Guard and has ascended to the rank of First Sergeant in a Buffalo-based infantry company. His former unit, Company B, 1st Battalion 108th Infantry, has since been inactivated and is now reorganized as part of the 2nd Squadron 101st Cavalry.

First Sergeant Steward Deployed to Afghanistan in 2006-2007 as the NCO in charge of an embedded training team from New York, and lead and mentored hundreds of members of the Afghan National Army during a full year "boots on the ground." He and his team returned home in May 2007. During a three week fall Annual Training period at Fort Drum for deploying members of the 27th Brigade Combat Team, First Sergeant Steward delivered hard-hitting presentations on the mission in Afghanistan to help prepare others for their forthcoming role as embedded trainers with the Afghan Army and Police

While deployed and since, he authored and maintained an award-winning military blog site (recognized by Military.com) http://bouhammer.com, which attracted the attention of Doonesbury creator Garry Trudeau. One of First Sergeant Steward’s most appreciated entries is the list of gear and items needed for a sandbox deployment, which has been included now in Trudeau’s new book entitled "The Sandbox."

In October, First Sergeant Steward participated with Mr. Trudeau in a book signing at the Pentagon for "The Sandbox" and later went with Trudeau to visit wounded warriors at Walter Reed Army Medical Center. The next day, First Sergeant Steward was interviewed on National Public Radio where he read one of his blog entries over the air.

While he was deployed, Steward’s wife Christine served as his unit’s lead volunteer for the Family Readiness Group and his son, also a Guard member will be deploying with the 27th in 2008.

"There were many high points and I am having a hard time identifying one that stands out above the rest," said First Sergeant Steward about the gala affair. "I mean, I had the chance to meet the Chairman of the Joint Chiefs of Staff -- Admiral Mike Mullen (that coin trumps all now!) and spend about 5-6 minutes with him discussing Afghanistan policy. What an opportunity that was and not one I ever thought I would have," he said.

"He walked up and asked me, ‘So First Sergeant you were in Afghanistan huh?’ As I looked at him in surprise he told me that he read all about me, including some entries from my blog -- which just about floored me," said Steward.

"He and I talked about the progress we are making on the ground with the ANA (Afghan National Army and what the new ANP (Afghan National Police.) It was refreshing to hear him acknowledge the strain that the ANP mission has put on Task Force Phoenix," he said.

"I have to thank the team I was with in Afghanistan," said Steward. "Whether it was the 16 guys I was with from New York or the guys I spent time with at Sharana -- for as much as I hope I helped them, I want them to know that they helped me," he said.

"I truly feel that I would not have succeeded on the tour without their friendship and professionalism and their presence by my side, fighting shoulder to shoulder," said Steward. "Every one of those guys holds a special place in my heart and I hold memories that I will never forget and will be forever indebted for," he said.