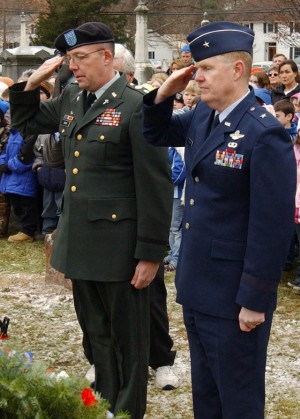 The National Guard traditionally recognizes the birthday of deceased presidents by laying wreaths on their graves.

Johnston, the commander of the 105th Airlift Wing, based at Stewart Air National Guard Base in Newburgh, noted Van Buren’s contributions to our nation during brief remarks to an audience of town officials and school children from Martin Van Buren Elementary School.

“When we think of presidents, you might think of them as being from a rich family or going to some prestigious school or maybe they are from a big city.” said Gen. Johnston. “But when you look at Martin Van Buren’s life, he was born just down the road from here on Hudson Street, right here in Kinderhook.”

Van Buren was known as “Old Kinderhook”, because of his hometown and marked papers he approved with an “OK,” giving rise to the term. He served as the 8th President from 1837 to 1841.

Before his presidency, he served as the country’s 8th vice-President under Andrew Jackson from 1833 to 1837.