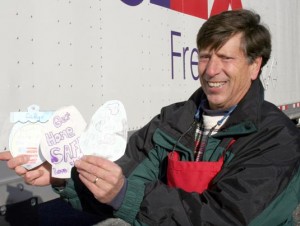 The Christmas SPIRIT Foundation and FedEx - in cooperation with the National Christmas Tree Association - organized this nationwide effort called Trees for Troops to boost the Christmas spirit for U.S. military men and women.

For the third consecutive year, the Trees for Troops program will deliver real Christmas Trees to the families of troops serving in the military. In the coming weeks, tree growers, retailers and FedEx Corp. will be donating and delivering more than 17,000 trees to more than 35 bases in the United States and overseas, including Iraq, Afghanistan, Kuwait, and Qatar.

“It’s tough to be away on Christmas in a war zone,” said 1st Sgt. Tony Coluccio, a National Guard Soldier with the N.Y. Army National Guard’s 42nd Infantry Division as he helped load the truck with the wrapped Christmas Trees. Coluccio spent the 2004 holiday season deployed to Samarra, Iraq with the Guard’s 2nd Battalion, 108th Infantry.

“You hear on the TV stations a lot of negative stuff about the war, and when this came out there were a lot of people who came forward and said, we want to support the troops. Soldiers are getting something from home they can feel and touch,” said Ellms Tree Farm owner Chip Ellms.

The 2007 Trees for Troops program launched November 13 when 300 trees from Ohio’s Operation Evergreen and the Indiana Christmas Tree Association were gathered and shipped to overseas bases. The pickup and deliveries of trees going to families at U.S. bases will run through early December with an additional international shipment bound for overseas military bases departing from the FedEx Express shipping hub in Indianapolis on Wednesday, November 28 with 100 trees bound for Bahrain and the Navy’s Fifth Fleet.

“It gets your mind off the war, a little thing from home,” said Staff Sgt. Daniel Brunner, another volunteer from the 42nd Infantry Division. Brunner spent Christmas last year deployed to Iraq.

The shipment of trees also included handwritten holiday messages from area schoolchildren for troops and their families. Messages included “thanks for defending our country,” “come home safely” and “good luck in the war -- I hope you all come back.”

The 2007 estimate is that more than 17,000 trees will reach troops and families across the country and the world, nearly 5,000 more trees than in past years.

“It means a lot when you’re over there,” said Sgt. Launa Dupigny who served in Tikrit, Iraq with the 42nd Infantry Division in 2005.