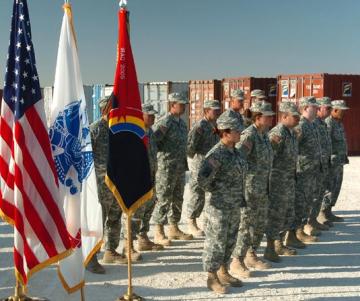 CAIRO, EGYPT -- Soldiers of the Army National Guard’s 42nd Infantry Division traveled halfway around the world to receive more than $172,000 tax free dollars for re-enlisting and extending their service with the New York Army National Guard.

Soldiers re-enlisting while on duty in Egypt are eligible for a $15,000 bonus.

“A free round trip flight and hotel, meals and a once-in-a-lifetime trip to one of the eight wonders of the world would normally be enough incentive for me, but also getting paid $15,000 tax free, you would think you won the lottery,” said Sgt 1st. Nicasio "Nick" Velazquez, a member of the 42nd Division Special Troops Battalion.

With 28 years of service, Velazquez, who re-enlisted for six years, is not eligble for a bonus, but it is a great deal for younger soldiers, he said.

With preparations for the Bright Star command post exercise well underway and the headquarters staff conducting 24-hour operations in full force, planning and organizing the reenlistment ceremony for Soldiers was no easy task. But for leaders of the division’s special troops battalion, the option was clear -- honor those who made the commitment to continue serving their state and their country.

“Retaining our the Soldiers is our Adjutant General’s [Major General Joseph Taluto] number one priority within the N.Y. Army National Guard and having this ceremony was an easy decision to make,” said Command Sgt. Maj. John Willsey, the senior enlisted Soldier from the STB. “To deploy here to Egypt and not recognize these great Soldiers was not an option,”

“Keeping Soldiers in the force is what keeps our division strong,” Genereux said. “I look out at this group of Soldiers and see the experience of veterans and the energy of our first-term troops. Together they are the backbone and the future of our Guard and our Army.”

“It was an honor to have the CG (Commanding General) take the time out from the exercise to acknowledge us,” said Spc. Karolyn Irizarry, an operations cell radio operator from the 4th Personnel Services Detachment out of Brooklyn, N.Y. “The ceremony was a reminder of the commitment that I have to my country and the Guard.”

“We could have reenlisted these Soldiers anytime throughout the year back home,” said Lt. Col. Russell Howe, commander of the STB, “but being able to offer them the opportunity to receive a tax free bonus and also visit the pyramids of Egypt was a great opportunity for our Soldiers and paints a great image for the N.Y. Army National Guard with all that is going on in the world today.”

Among the dozen Soldiers, a general sense expressed the appreciation for the Army National Guard bonus, but the bonus was not the primary motivator for the Soldiers’ commitment to stay in service.

“I truly believe that we all have a responsibility to our country, and the love of my country keeps me reenlisting,” Velazquez said.