Joint Exercise, Training for a Disaster 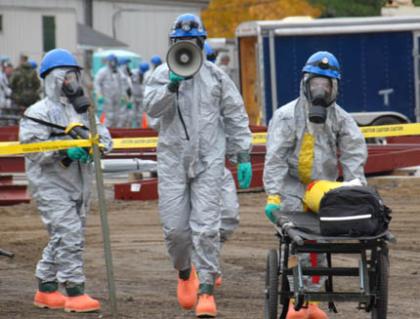 Members of New Yorks CERF-P team conduct an exercise to help better prepare them for emergencies such as a "Weapons of Mass Destruction" attack on New York Saturday, Nov. 3, 2007. Photo by SMsgt Willie Gizara, 109th AW

Colonie, N.Y -- The massive explosion had demolished the State Accounting Office and 300 people were trapped inside. To make matters worse, mustard gas, a chemical weapon that causes the skin to blister, had been detected on the site.

Now specially-trained members of the New York National Guard, clad in gray chemical suits with face masks swarmed over the rubble pile, sifting through the wreckage looking for survivors. Sometimes they pulled out a horribly wounded victim, other times it was a body.

On this day, fortunately, the Soldiers and Airmen were only training, as part of a two-day exercise held Nov. 2 and 3 at the New York State Office of Fire Prevention and Control’s Urban Search and Rescue training site. The joint exercise tested the ability of Army and Air National Guard members, and members of the volunteer New York Guard, to respond to a major terrorist incident when civilian first responders need help.

“This training environment tested our extraction capabilities and put our Soldiers to the test in looking for survivors”, said Sgt. 1st Class Sandra Moody, a training NCO for the exercise.

Taking part in the training was the 2nd Civil Support Team, a unit especially trained and equipped to detect chemical and biological attacks, and the National Guard’s CERF-P, a joint element trained to provide support to civilian first responders in a major terrorist attack.

The purpose of the training was to build interagency coordination between the 2nd Civil Support Team and CERF-P, which stands for Chemical, Biological, Radiological, or High Explosive Enhanced Force Package , and the State’s Urban Search and Rescue Task Force. The goal, said Lt. Col. John Andonie, Director of Military Support for the New York National Guard, is to build relationships so that if a major disaster strikes, it will not be the first time these teams work together.

The training provided an opportunity for individuals to improve and refine their skills in supporting civil authorities during an incident requiring casualty evacuation from a collapsed building.

“Obviously, no-one wants to think of a disaster in this state,” Andonie said. “We have to be prepared, and the purpose of this exercise is to make sure that when we are called upon and needed, that we are ready to do our jobs, we do it to “Save Lives” and that is what it is really all about.”

Day one of the exercise required the CST Perimeter Monitoring Team (PMT) to clear what they call a “Footprint.”

According to Capt. Peter Mehling, 2nd CST survey team leader, a Footprint, or an area on the earth, a geographic area, is a spot which will be occupied later on for Command and Support structures.

“When we clear a Footprint, we are verifying there are no chemical, biological, or radiological hazards on the ground that is contaminated which could harm us while we are in our Footprint,” said Mehling. “We are making sure that we are in a clean and safe area.”

The CST originated in 2001 and is a high priority response unit which supports civil authorities in responding to weapons of mass destruction (WMD) situations. The unit is made up of 22 full-time National Guard members who have been specially trained and equipped to provide a technical reach-back capability to other experts.

“The purpose of the CST is to support civil authorities by assisting them with identifying chemical, biological, radiological, nuclear high yield explosive agents or substances,” said Matthew Cooper, commander 2nd CST. “We assess the situation, provide recommendations for decontamination, medical treatment, and also provide them assistance with getting follow on forces through the National Guard, like the Chemical, Biological, Radiological, or High Explosive Enhanced Force Package (CERFP).”

CERFP provides a response capability to the Governor including: incident search site capability of damaged buildings, rescuing trapped casualties, providing decontamination, and performing medical triage and initial treatment to stabilize patients for transport to medical facilities. The CERF-P relieves civilian first responders who have probably already been on the site.

CERFP is comprised of four elements staffed by personnel from already established National Guard Units. The elements are Command and Control, Medical, Decontamination, and Search and Extraction.

The 2nd Battalion 108th Infantry provides the command and decontamination elements for the team, while the 152nd Engineer Co. provides the core of the search and extraction team. The medical personnel come from the 174th Fighter Wing.

Day two of the exercise showed what each element can provide. From the search and extraction team where they entered the collapsed building and began pulling survivors out of the rubble. Each casualty was then escorted to a decontamination tent where they were washed down to remove any chemicals that they may have on them. Then a medical professional checked each person to find the extent of their injuries.

“This whole Task Force is for an unfortunate incident for WMD, which could be caused by a terrorist act or by a chemical accident in an industrial or urban area,” said Lt. Col. Dennis Deeley, commander, 2 Battalion, 108th Infantry, Utica, N.Y., and CERFP commander. “These teams are designed to get casualties out of a hot zone, get then decontaminated, and into medical care.”

Each team worked diligently as if this was not a training exercise and showed what they are capable of, which is “Saving Lives,” after a disaster strikes.

Along with testing the CST and CERFP, the exercise also called for standing up the state’s Joint Operations Center and Joint Task Force 3, built around the 53rd Troop Command headquarters, to provide command and control for the operation. This expanded the training opportunity, Andonie explained.

A total of 329 Soldiers, Airmen and New York Guard members took part in the two-day operation.

“As National Guard Soldiers, we hope we never have to be used,” said Andonie. “ But we stand ready and prepared for the unexpected.”