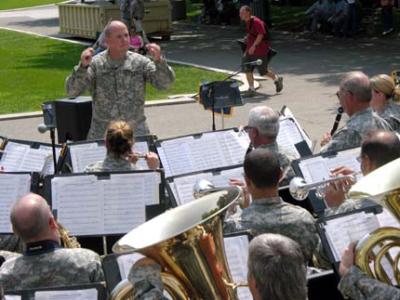 ALBANY -- Most Citizen Soldiers think of annual training in terms of Fort Dix, N.J. or Fort Drum, N.Y. and living out in the field to conduct combat skills training. This summer, members of the New York Army National Guard’s 42nd Infantry Division Band from Camp Smith took their military skills to a different environment: the concert in the park. The division band conducted six community concerts throughout the Capital Region as the unit’s annual training.

“This is all collective training,” said Chief Warrant Officer Mark Kimes, commander of the Rainbow Division band, “it’s what we do.

The concert series provided community performances in Hudson, Schenectady, Lake George, Troy, Albany and Glens Falls. The band performed a wide range of musical numbers, ranging from classical pieces such as the Carmen suite, a waltz by Johan Strauss, a musical tribute to the Tuskegee Airmen entitled “of honor and valor eternal,” as well as a composite tribute to Walt Disney music.

“On an hour or hour and a half concert, you have about eight or nine hours for moving, setup and getting ready to go,” he said at the Capital Park performance in Albany. “Prior to that, you have about five or six hours of rehearsal time. So you are looking at 15 hours to make an hour of music,” Saroka explained.

Part of the performance of the band included contemporary musical numbers by a performance group called “Moments’ notice.” With vocalist Sgt. Jennifer Castle, the group performed rock, jazz and latin musical arrangements. The group’s name refers to how they first formed upon arrival in Tikrit, Iraq in early 2005.

“Here we are in Iraq without most of our instruments or equipment yet, when the commanding general requests a musical performance for some visiting Iraqi dignitaries,” Kimes described for the concert audience. “In good Soldier fashion, we grouped together the musicians we had available, rehearsed through the night and pulled off the performance without a hitch. So, “Moment’s notice” seemed a perfect name for the group,” he said.

Members of the division band mobilized and deployed for service in Iraq from 2004 to late 2005 as part of the 42nd Infantry Division’s support to Operation Iraqi Freedom. The deployment marked the first time a National Guard band has deployed to a theater of combat since World War Two.

The Soldier/musicians of the band performed security duties at Forward Operating Base Danger in Tikrit, Iraq while supporting musical performances across the entire division area of operations. Musical performances by the division band included both morale and recreation events as well as joint U.S. and Iraqi military ceremonies.

“We provided musical support to Iraqi army and police graduation ceremonies at our Forward Operating Base,” Kimes described of the band’s musical performances with the Rainbow Division task force in Iraq.

“This really is the best job in the Army,” said Sgt. 1st Class Elizabeth Torres from the unit. Torres came to the unit last year when the 42nd Infantry Division Band absorbed the Army Guard’s 199th Band as part of the state’s reorganization of forces. The current Rainbow Band includes nearly as many new members as combat veterans from Iraq.

“My goal for this annual training is to bond this band together,” said Kimes. “This is just the kind of effort I’ve wanted to do with this band in Iraq.”