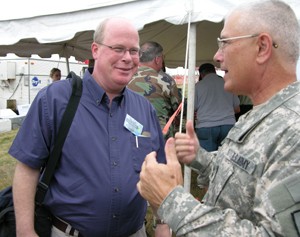 Airmen of the New York Air National Guard’s 107th Air Refueling Wing got to show their stuff for their bosses, Aug. 9 as the wing held its annual Boss Day.

About 85 employers attended the event, held in conjunction with the 914th Airlift Wing, an Air Force Reserve unit which shares the Niagara Falls Air Reserve Station with 107th.

The guests rode in KC-135 tanker aircraft operated by the 107th as they conducted actual refueling missions. The tanker aircraft refueled F-15s on missions during the exercise, said Lt. Col. Barry Griffiths, the 107th’s executive officer.

Guests of the 914th got rides on the C-130s the Air Force Reserve wing operates.

The event provided a great opportunity to show support for the Air National Guard and its Airmen, said Mike Basil, owner of Basil Toyota of Lockport. It was impressive to watch the 107th’s Airmen carry out their mission, he added.

Kevin Parfelt, an engineering manager at Harris RF Communication, attended at the invitation of his employee, Air National Guard Major Don Dever, a test engineer at the 107th. The event gave him a chance to show his boss what he does during a drill weekend, Dever said.

The attraction of flying with the 107th and the 914th always brings a lot of people out to the annual event, said regional Employer Support of the Guard and Reserve Chairman Frederick Dentinger.

Major General Joseph Taluto, the Adjutant General of New York, was on hand to lend his thanks to employers for supporting the service of their employees in the Air National Guard. Taluto spoke with employers about the importance of the guard and their role.

The event was held two days before the annual Thunder over Niagara Airshow, so the employers were able to view the spectacular arrival show of the Air Force’s Thunderbirds aerobatics teams. Giving the employers and supporters a ring-side seat to that show is another way of saying thank you, said Col. Patrick Ginavan, the 107ths commander.