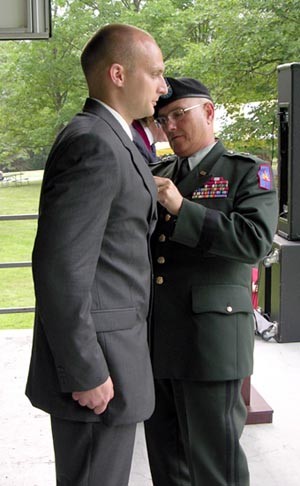 NEW WINDSOR, NY - Two New York Army National Guard Soldiers and a Marine who were wounded in Iraq, but whose Purple Hearts were delayed, received their medals Aug 7 at a ceremony marking the 75th anniversary of the awards creation.

Major General Joseph Taluto, the Adjutant General of New York, presented the awards during a ceremony hosted by the Military Order of the Purple Heart, a veterans group, at New Windsor Cantonment State Historic Site. George Washington created the predecessor of the Purple Heart-the Military Order of Merit-at the Continental Army’s encampment at this location in 1782.

Taluto presented the medals to Spec. Tim Pritchard, who was wounded outside Samarra, Iraq on Aug 20, 2004 when an IED hit his vehicle; Spec. Aaron Moquin, wounded by misdirected counter battery fire on 6 April 2004 outside Balad, Iraq; and to Marine Lance Corp. Gary Polk, who was wounded in action in Anbar province in September 2006.

All three are no longer in the service. Pritchard and Moquin are former members of 2nd Battalion 108th Infantry.

Their Purple Heart presentations were delayed because of lost paperwork, and lack of the right opportunity. The ceremony on Aug. 7 was the right time and place to receive his award, Pritchard said.

Taluto praised the service members and told them he was honored to be the one to present their medals.

The presentation was incorporated in a two hour long ceremony that was the highlight of the Military Order of the Purple Heart’s annual convention.

Sgt. Donald Leinfelder represents wounded veterans of the Iraq War during a ceremony honoring the 75th Anniversary of the creation of the modern Purple Heart at New Windsor Cantonment State Historic Site Aug 7. Photo by: Eric Durr Sgt. Donald Leinfelder, readiness NCO for the 3rd Battalion 142nd Aviation, represented Purple Heart recipients from Iraq during the ceremony. Leinfelder, who deployed with the 1stBattalion 69th Infantry, sustained wounds while patrolling along Route Irish, the highway from downtown Baghdad to Baghdad International Airport, in April of 2005. An RPG round fired from a passing vehicle hit the gunner’s hatch of Leinfelder’s M-114, showering him with shrapnel.

The 3rd Battalion 142nd Aviation also participated in the ceremony with a four-ship Blackhawk helicopter flyover.

New Windsor State Historic Site is also home to the National Purple Heart Hall of Honor. When the award was created in 1932 to recognize wounded soldiers, the first medals were passed out to World War I veterans at the historic site.

The Military Order of the Purple Heart was created in 1932 to look out for the interests of those who have been awarded the medal. It is the only veterans group comprised solely of combat veterans.

The group donated a permanent memorial at the National Purple Heart Hall of Honor on Aug. 7 as well. Sen. Hillary Rodham Clinton attended the event, which was hosted by the New York Office of Parks, Recreation and Historic Preservation.