Putting Aerial Systems to the Test 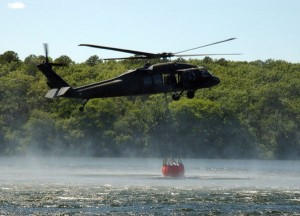 A New York Army National Guard UH-60 Blackhawk helicopter hovers over Wildwood Lake near near the David A. Saranoff Pine Barren Preserve, near Riverhead, Long Island, New York. The helicopter extracted hundreds of gallons of water in a Bambi bucket to drop at a controlled burn barrel inside the Preserve. The fire-fighting demonstration was coordinated by the New York State Department of Environmental Conservation and attended by other state and local emergency management and response agencies. The helicopter and crew, stationed at Army Avaition Support Facility #1 - Ronkonkoma, was flown by 1st Lt. Daniel Hoffman, Chief Warrant Officer Bruce Hoffman and crew chief Sgt. 1st Class Chris Klimek.

The sessions were hosted by the New York State Department of Environmental Conservation, Division of Forest Protection and Fire Management, Region One. “There are currently four Firehawks in the National Guard,” said Chief Warrant Officer Chuck Rodda, full-time instructor pilot and Army Aviation Support Facility #3 safety officer. “There are two in California, one in Florida and one here in New York.”

According to Rodda, within the four years that the 3rd Battalion, 142nd Aviation Regiment has owned and operated the Firehawk system, it has not been called on to fight wildfires in New York or else where in the United States.

The Firehawk is a fixed-tank system for quick deployment of water and personnel to an emergency response site. The Firehawk uses a snorkel system to siphon water to fill a 1,000 gallon capacity tank in about 60 seconds. The more traditional Bambi bucket aerial fire-fighting system is made of lightweight collapsible vinyl that can be set-up in less than fifteen minutes by a four-man crew. It can scoop up and carry as much as 660 gallons of water. It can perform this maneuver in less than a minute. Water is manually released by a valve at the bottom of the bucket.

The purpose of the two-day training sessions was to coordinate and familiarize various state and local emergency response and management agencies with the firefighting capabilities of the National Guards delivery systems. “The training that is taking place here today was training for the fire service section.” said Capt. Tim Brynes, New York State Forest Ranger supervisor for the New York City, Suffolk and Nassau county region. “The National Guard demonstrated their ability to use these systems and the capabilities of the aircraft.” Both systems offer rapid deploy ability along with quick water refills and drops between cycles.

Both the 142nd and the DEC concurred that in the event of any actual wildfires in New York State, both agencies would welcome the opportunity to partner in fighting wildfires.