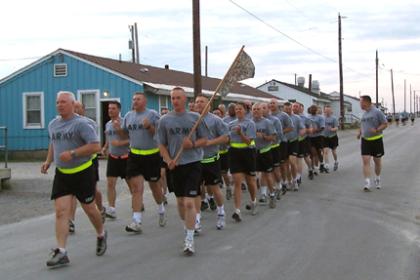 Members of the 27th BCT’s Training Assistance Group formed up early in the morning on their last day of AT for what has become a tradition - To run a three-mile course around the "Old Post" of Fort Drum. Photo by: Maj. Kathy Oliver, 27th BCT Public Affairs Office

The 27th has begun an aggressive period of preparation, training and organizing in anticipation of a new, priority Army assignment. Dozens of new Orion officers and enlisted Soldiers continue to be transferred in from the state headquarters, 106th Regional Training Institute, 42nd Infantry Division and 53rd Troop Command.

A major objective that was achieved during the training period was the successful passage of hundreds of Guard members through Soldier Readiness Processing at the new National Guard Readiness Center on post, building T-855. The Readiness Center is a new, state of the art armory for the New York National Guard and it is located in the post’s old cantonment area and near Building T-851 -- the vintage barracks building the 27th Brigade continues to use as a headquarters when training on post. In addition, the Fort Drum Simulation Center is also nearby. This modern facility was used to support briefings, instruction and a command post exercise during the second week of training.

“The 27th has entered an exciting new period as we prepare for an important future mission,” said Col. Brian Balfe, brigade commander in a welcoming message to the troops. “We have much to accomplish over the next few weeks and every Soldier must be focused on preparing now for the challenges ahead. I am proud of each and every Orion Soldier and grateful to all for volunteering to serve our nation, state and communities here in the Guard.”

Key training events included infantry security force activities, live fire, support operations and for the first time a special external evaluation of selected 108th Infantry Soldiers assigned to a terror response team dubbed “CERFP” (pronounced SERF-PEE.) The team’s special assignment is to respond to potential future terrorist attacks in New York where a chemical, biological or radiological weapon has been used. For the last year, Soldiers of the 108th trained intensely for the external evaluation that was accomplished on 17 June. (See the separate story in this edition of Guard Times.)

The Commanding General of the 42nd Infantry Division praised the 27th Infantry Brigade Combat team for its aggressive individual, section and team training even as field operations were just beginning to hit stride. “You have a lot of work to do, but you have stepped up and are making great progress,” said Brigadier General Paul Genereux at the brigade’s Army Birthday celebration at the Fort Drum Commons on Thursday night, June 14th.

The general spoke to recent changes in the Army mobilization training program that drove much of the 27th’s training agenda. “The big Army is allowing the National Guard to validate its own training now. That’s never been done before,” he said. Leaders from the 42nd, 27th, 53rd Troop Command and state headquarters came together at Fort Drum for the training, said he general. “The spirit of cooperation and the quality of training is terrific. Keep it up,” he said.

In the field, Soldiers of the 101st Cavalry, 69th and 108th Infantry, 258th Field Artillery and other elements fired live with individual and crew served weapons, performed mounted and dismounted land navigation and practiced throwing hand grenades among other tasks. Members of one company of the 69th Infantry had a special opportunity to conduct air-assault training with elements of the Army’s 10th Mountain Division Aviation Brigade.

Validated training in map reading, first aid tasks, reaction to enemy contact, and other topics were covered. Intense instruction for tactical vehicle drivers was presented to selected personnel. A humvee-rollover training simulator was a highlight and feature of the instruction provided. In addition, many Soldiers had the opportunity to conduct simulator training for individual and crew served weapons and call for fire.

Troops and Leaders Praised for Successful AT

At the end of the training, the 27th Brigade commander praised his Soldiers, leaders and staff for the extra efforts they made. Although the training was not perfect, said Col. Balfe, the 27th accomplished a lot in a short time. “We have done very well. Task Force Orion and the T & E (42nd Training and Evaluation) battalion have my thanks,” he said.

“By now, you must have the feeling that what we are about to do is very real,” said Col. Balfe. “The training you are getting is meant to save your life and the lives of other Soldiers,” he stressed.

The 27th will conduct another aggressive three-week Annual Training period in October at Fort Drum to continue its efforts and has already begun preparations for it during monthly drills scheduled through the summer and into the fall.