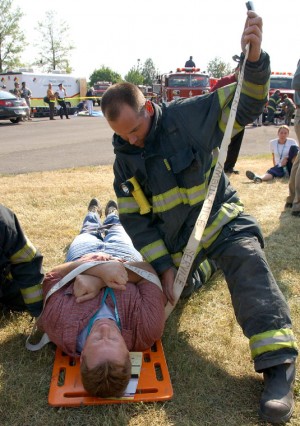 "The exercise was designed to challenge local community responders’ ability to react to an incident on Griffiss Park. It was also an outstanding opportunity to bring all of the community and military organizations together to practice what could likely be a real-world situation," said NEADS Commander Col. Clark Speicher.

"Because Griffiss still houses federal agencies it makes it all the more important for local first responders to be prepared for possible chemical or biological attacks,” Speicher said.

NEADS is responsible for command and control of the air defense network in the eastern United States and Canada.

The scenario included simulated intelligence information alluding to a planned attack at Griffiss communicated by terrorist organizations and suspicious activities like the purchase of large amounts materials that could be used to build a bomb.

Once this information was released to members at NEADS, appropriate actions were taken to increase security surveillance for suspicious activity, said Ken Hemshrot, the lead exercise planner for NEADS.

Exercise planners began organizing the event last October and worked to include community organizations that would be responders in the event of an attack at Griffiss Park. The exercise tested various aspects of first responders’ ability to cope with a mass casualty scenario.

"An exercise of this magnitude takes a great deal of coordination and planning. Our goal was to test our capabilities and seek ways to hone our skills," Hemshrot said.

"Once the exercise began, we quickly found out that communication between all the agencies involved needed to be enhanced. In the confusion that can follow such a traumatic event, communication is critical to saving lives and minimizing damage,” he added.

When the simulated dirty bomb exploded, pretend victims from NEADS and Air Force Research Labs affected by the explosion were placed near the scene of the incident for first responders to find and provide medical attention. The victims were stabilized at the scene and transported to Rome Memorial Hospital for further treatment.

"The drill underscores the importance of cooperation and established lines of communication," said Kim Weiler, R.N., disaster preparedness coordinator at Rome Memorial Hospital. "Drills help to ensure that available resources are mobilized in a coordinated effort to minimize delays and confusion in the event of a major disaster, whether manmade or natural."

"Now more than ever, it is essential to coordinate disaster planning with other community front-line responders such as police, fire and ambulance services," said the hospital’s Emergency Department Director Kathleen O’Rourke, R.N. "A single facility or agency can not handle every possible scenario on its own. By working together, we are better prepared to respond and meet the needs of our community."

"Because of the cooperation between military and civilian authorities we will be better able to save lives, relieve human suffering and mitigate property damage," Speicher said. "This kind of teamwork is vital to our success - this is just one more example of Air National Guard and local authorities working together for the good of the community."