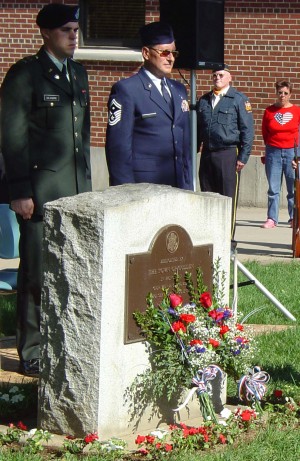 Service members of the N.Y. Army and Air National Guard stand at attention during the dedication of the Town of Colden monument to its fallen on Memorial Day, May 28, 2007. The N.Y. National Guard provided an honor guard and other support to the Colden Memorial Day celebration. Photo by retired Master Sgt. Joseph Murray.

COLDEN, N.Y. -- This year, the Town of Colden in Erie County dedicated its new Veteran’s Memorial Monument which lists the names of over 690 local service members who served the Nation from 1776 to the present. Several hundred residents of the town attended the dedication, not unusual for this small Western New York community about fifteen miles south of Buffalo.

The Town of Colden currently has citizens deployed to both Iraq and Afghanistan. Two Soldiers that recently returned home from Iraq are Maj. David Beardi, a former member of the 42nd Infantry Division who was injured in Iraq and presently receiving medical treatment at Walter Reed Army Hospital and Sgt. 1st Class Christopher Holmes, also a veteran of the National Guard’s 42nd Infantry.

As in many communities across New York State for Memorial Day weekend, a Memorial Day Service remembering and honoring veterans who gave their lives for freedom began with a parade down the center of town followed by services at the Veterans Memorial Park. Members of Company C, 27th BSTB provided a Color Guard and led the parade while another detail of Soldiers raised the American flag during the ceremony.

Lieutenant Frank Salvatore of the 27th BSTB presented a speech and assisted the Town Supervisor, Charles Nuttle with the unveiling and dedication of the memorial. During the ceremony, local Girl and Boy Scout Troops laid flowers honoring fallen heroes and a reading of the Town Resolution dedicating the memorial was handled by Town Councilman Terri Kloiber.

“It is fitting that, as we commemorate the dedication of this memorial, we are joined together with other organizations and individuals who have worked to recognize the service and sacrifice of America’s brave fighting men and women,” said Nuttle.

“The Town of Colden expresses its support and gratitude for all of the men and women who served honorably in the Armed Forces of the United States in defense of freedom and democracy during the all Wars,” read Kloiber from the Town Resolution, “and extends its sympathies to all people in the United States who suffered the loss of friends and family in any War; and encourages the people of the Town of Colden to remember the sacrifices of our veterans.”

A letter read from Col. Fred Kubus, Commander of the National Guard’s 153rd Troop Command Headquarters personally thanked the Town of Colden for their continued support of the New York Army National Guard.

Joining the National Guard and community of Colden were many local organizations such as the Veterans of Foreign Wars, Disabled American Veterans (DAV), the American Legion Concord Post # 431, the 174th Veteran Association, the 106th Field Artillery Association, and volunteers of the New York State Guard.

The veteran’s memorial depicts the 690 names etched on black granite in remembrance of the veterans’ selfless dedication to the nation. The memorial sits beside a fallen Soldier memorial and stone monument dedicated to the veterans of all wars. The Veterans Memorial Park cost approximately $43,000 and construction began last summer.

Work began on this memorial five years ago under the previous Town Supervisor, Marilynn Calhoun, who always had a special place in her heart for veterans. She had a vision to recognize area veterans, organized a veteran’s committee to assist her in developing a list of names and arranged the funds for construction.

Mrs. Calhoun chaired a committee that included retired members of the N.Y. National Guard, a Korean War veteran, a serving member of the Air National Guard and Mr. John Kotlarsz, the Town Building Inspector. Mrs. Calhoun secured architect Thomas H. Caley who volunteered to design and manage the project at no cost.

Calhoun retired after twenty years of dedicated service to Colden and her successor, Charles Nuttle completed the project. Mrs. Calhoun stayed on as the Chairman of the Veterans Committee and worked very closely with Nuttle, reviewing tax records, cemetery records, Erie County Historical Society records, and membership records to local veteran groups to ensure that no veteran was inadvertently omitted from the memorial.

Each year new names will be added as necessary and dedicated annually on Memorial Day.