Preparing for the Big One 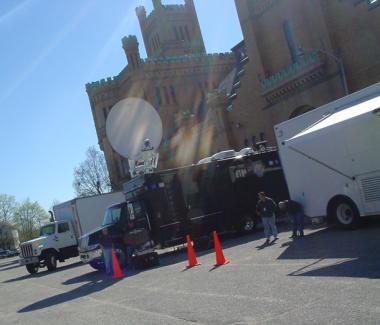 Support vehicles from state and federal emergency response agencies partnered with members of the National Guard and Northern Command’s ARNORTH during the hurricane response exercise Ardent Sentry from May 1-4, 2007 in Providence, Rhode Island. Courtesy photo

With the hurricane season beginning on 1 June, the New York National Guard is actively preparing to respond as it always has, to emergencies at home or elsewhere in our nation. Nationally, the Guard uses exercises like these to test and ensure it is even more capable and more ready than when 50,000 Citizen-Soldiers and --Airmen from across the nation including New York saved more than 17,000 lives in response to Hurricanes Katrina and Rita in 2005.

No National Guard members were actually deployed; however, seven New England states including New York and the National Guard Bureau were engaged to enhance the emergency response capabilities and coordination of all first responders by using simulations. The joint exercise included participants from local, state and federal agencies, the Department of Defense, FEMA (Regions I and II), and the Department of Homeland Security.

The team from the New York National Guard was also a key participant in the Unified Command Cell in Suffolk County that had leaders from all levels of government (townships, counties, State and Federal). The interagency cooperation was a significant step forward to address lessons learned from Hurricane Katrina.

The HURREX” gave both civilian first response agencies and the National Guard -- the first military responder - an opportunity to participate in a full range of training scenarios designed to better prepare all participants to respond to a local, state and/or national crises. The National Guard exercises along with state and civil authorities to better improve the unity of effort between all first response agencies in the event of a disaster. The unity of effort established by exercises like these better equips civilian and military entities to operate seamlessly in a joint environment.