Airmen Return from Deployment to Kyrgyzstan 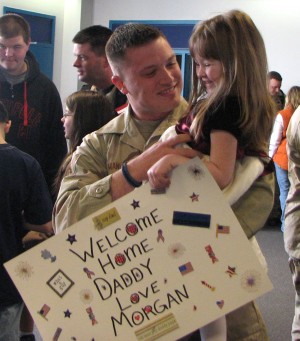 Staff Sgt. Stephen Manley, a Northeast Air Defense Sector Security Force member returning from deployment, smiles at his daughter Morgan at the Syracuse International Airport March 14. In the unit’s largest deployment ever, nearly 30 security force members deployed on a six-month tour to Manas Air Base, located in Kyrgyzstan, in September 2007.

It was the largest deployment ever for NEADS, a Rome-based unit responsible for monitoring North American Airspace east of the Mississippi River.

In the unit’s largest deployment ever, nearly 30 security force members deployed on a six-month tour to Manas Air Base, located in Kyrgyzstan, in September 2007. The deployment also involved Guard units in six other states, which resulted in the first-ever all Guard Security Force team at Manas.

The unit returned home in March.

“This deployment afforded the opportunity for the families, NEADS personnel and local community to come together in support of the troops,” said former NEADS commander Col. Clark Speicher. “As a result of the deployment, the unit brought together many resources and created the Family Readiness Group, which supported the deployed member and their families.”

NEADS Chaplain (Lt. Col.) Tim Bejian, who was on-hand to support the troops and their families, said that volunteers were the key to supporting the families during the deployment.

“One of the best demonstrations on how the NEADS family came together to make sure that the families of our deployed members were taken care of in their absence was the Helping Hands volunteers,” he explained. “The response of volunteers making sure that our troop’s families were watched over and helped when needs arose was impressive.

Each of the volunteers already had busy lives and little free time, but they made time to help when the need was at hand, he continued. Even more impressive was that many who didn’t formally volunteer were quick to offer assistance when they learned of a need. All this just confirmed to me that the people here are of the highest quality.”

While deployed, the N.Y. Air National Guard members provided force protection for operations at the 376th Expeditionary Wing. The 376th is the lead refueling wing and premiere mobility hub for operations over Afghanistan. The troops were also able to get out into the Oktyabra’skoe community for humanitarian missions.

“It was important for the troops deployed to Manas to perform community outreach and humanitarian assistance to our sister village, which was Oktyabra’skoe,” said Security Force superintendant Senior Master Sgt. Paul Dubay. “Providing the community things like coal for schools when they didn’t have any and interacting with the elders resulted in improved relations between the base and the local community.”

Tech. Sgt. Robert Kane worked to provide force protection on the flightline, and experienced a local weather phenomenon called ice fog, in addition to dealing with the extreme cold weather of the area.

“The ice fog would cause visibility issues,” explained Sergeant Kane. “It would literally come out of nowhere -- and the base was nowhere near any kind of water either.” Another NEADS member deployed to Manas, Master Sgt. Joseph Montana, worked with the Office of Special Investigations on collecting identification data for a database. Sergeant Montana also engaged the local community by helping their security personnel train K-9s.

“I helped the local police center train their K-9s so that they were trained to our standards,” explained Sergeant Montana, who is a certified K-9 trainer and his three dogs are happy to have him home.

On the homefront, local businesses stepped-up to the plate to support the deployed troops by assisting with mailing care packages. Master Sgt. Danny Doucette, NEADS first sergeant, said that “... there were some businesses that didn’t even know the Air Force was still located at Griffiss Park. Once they heard we were, the community support was tremendous throughout the deployment.”

“Currently, we are putting together a reunion/reintegration program,” said Sergeant Doucette. “This will include a weekend for the troops to help them cope with any stress as they reintegrate and reconnect with work, society and their loves ones.”

While the deployment brought together a community of support for the Security Force members, the overall mission of NEADS to provide air sovereignty and execute counter-air operations over the eastern United States in support of North American Aerospace Defense Command and U.S. Northern Command Homeland Defense Missions carried on.