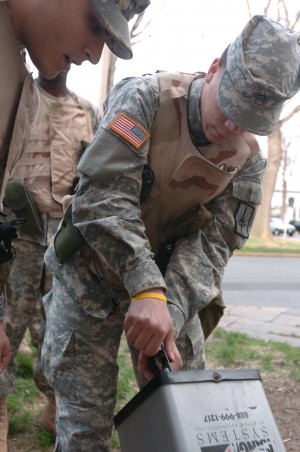 NEW YORK CITY -- When Pope Benedict XVI visited New York City April 18-20, Soldiers of the New York Army National Guard were on duty behind the scenes, ready to provide security if called upon.

“At Team Airport, we provide security for the JFK and LaGuardia airports in support of the law enforcement agencies,” said Maj. Angelo Agro, the Team Airport commander. “We have soldiers out there 24/7 providing security.”

Some of the training involved familiarization with the Glock 19 pistol, weapons awareness and retention, and quick reaction drills for the Quick Reaction Force (QRF).

The troops were trained in marksmanship and other safety procedures using the beam-hit simulator by experienced instructors.

“I want to make sure that they are confident enough to control the weapon and to rely on their training to continue on with the mission,” Noguera said.

The weapons awareness and retention safety class was a reinforcement of previous training reminding Soldiers how to carry a weapon in a civilian environment.

“We taught them basic body movements and defensive tactics while carrying a weapon,” said Staff Sgt. Robert Riello, the QRF support training NCO. “We are teaching them to make sure their weapons remain in their control at all times.”

The QRF is a group of Soldiers from different units across the state brought together to form Team Airport. Part of their responsibility entails being on call to provide support to local authorities whenever needed.