3-142nd Aviators Switch From Training to Support Mission in Hours 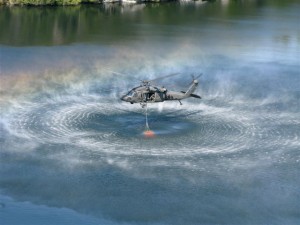 A New York Army National Guard Blackhawk helicopter takes on a 660 gallon load of water as it prepares to attack the Wildfires at Minnewasak State Park Presrve, Ulster County, April 20.

The aviators, assigned to 3rd Battalion, 142nd Aviation, were in the final phases of pre-deployment training at Fort Drum when the wildfires broke out on April 17. When New York Governor David Paterson directed National Guard assistance, the crews switched from a training mission to a real-world mission to support civilian firefighters.

“Both commanders quickly identified aircraft and crews and were on their way,” Bobeck said. “It took approximately five and one-half hours to deploy the Blackhawks from Fort Drum to dumping water on the fires.”

While Blackhawks from Fort Drum were in route, ground crews at the Army Aviation Support Facility in Latham, N.Y. were preparing the “Bambi Buckets” to be air-lifted to the fire site. Bambi Buckets are collapsible, fast-fill, buckets that can be slung underneath a helicopter. They can take in 660 gallons of water in about two minutes.

“Flying over water is a different type of flying.” Said Chief Warrant Officer Mark Shumway, one of the pilots who flew the missions. “Once the Bambi Bucket is full it can weigh more than 5000 pounds, then it becomes a question of power management and maneuverability to get the bucket to the target.” “Once over the flames, hover time and evacuation are critical,” Shumway said.

“By Saturday, the fire was raging making it difficult to accurately get over the target because of the smoke so we have to hover lower and then exit as quickly as possible,” he said.

“I like what we do.” Shumway, said. “It’s a humanitarian mission not unlike hurricane and flood relief missions. Hopefully we prevented anyone from getting injured or losing their homes.”

The 3rd Battalion, 142nd was at Fort Drum training for a mission in Iraq later this year. The unit will provide transportation support for Multinational Corps Iraq.