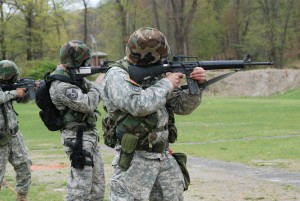 Competition in the Adjutant General’s Combat Rifle, Sniper, Pistol, and Light Machine Gun Championship Match, or “Tag Match” is open to all Reserve or National Guard Soldiers, Sailors, Airmen and Marines throughout New York and neighboring states as well. Members of the New York Guard, the state’s all volunteer defense force, also participated.

“People that participate are all service members of some unit in New York,” said Maj. Dana Brewer, State Mobilization Readiness Officer. “However, any battalion-sized element from a neighboring state can put together a team.”

According to Brewer there is more to the competition besides getting the best score and accepting a trophy.

“Here we’ll show you where you hit the target and when you miss we’ll show the Soldier how so he or she understands what they’re doing wrong.” Brewer said. “Then the Soldier will have that basic skill reinforced so he or she can go back to their unit and help with their marksmanship program.”

This year marked the 29th Annual “Modern TAG Matches” as Brewer referred to them. He pointed out that records started to be kept about 1978, but that there are paper records that date back to the late 1930’s. And New York National Guard units have been winning trophies for marksmanship, still found in many armories, since the 1870s.

Competitors came from Buffalo, Rochester, Syracuse and New York City as well as Connecticut and Massachusetts. However, only New York military members are awarded the first, second and third place trophies.

To learn more about the “TAG Matches” go to: ww.dmna.state.ny.us/sarts/services.htm.