Breaking Ground for Operation `Beyond the Horizon 08` 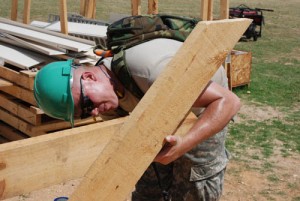 Working together with the Trinidad Defense Forces, the joint service task force, the American Partnership for the Americas Engagement Team (PEAT), will build two public schools and a medical clinic while providing free medical and dental screenings across the country. Each participating National Guard unit deploys for a two-week tour in Trinidad with a command and control contingent from the United States Army South (USARSO).

U.S. Army South arrived in Trinidad in February and will supervise operations through the final rotation of National Guard forces in June when all proposed sites are expected to be completed. The PEAT will continue until September 2008 with missions supporting five additional Caribbean nations.

“Operation Beyond the Horizon 2008 is a new concept,” said Col. Robert Casias, the commander of the Partnership for the Americas Engagement Team. “We are here in Trinidad and Tobago doing engineering projects...we are constructing schools and a medical clinic and doing some renovations of other buildings in addition to free medical and dental screenings for the citizens of Trinidad and Tobago”.

To date, the construction of two schools and one medical clinic started this month with a completion date of early June. “We are continuing from where the last rotation left off,” said Sgt. Michael Quijano the site construction NCOIC at the St. Mary’s orphanage where a school and medical clinic are in the early stages of development. Working together with the Navy Seabees Mobile Construction Battalion 74 from Gulfport Mississippi, the New York National Guard engineers undertook the task at hand with a zealous motivation.

“We hit the ground running since this is our first day on site,” Quijano said. “We are highly motivated to get as much done in the two weeks we are here.” Quijano is a resident of Staten Island and has been with the 1156th for four years. In his civilian occupation, he is a carpenter for the City of New York.

Even though the projected school and clinic are scheduled for completion in early June and the 1156th has only 11 more days at the site, Quijano wants to complete the school and the clinic before the next National Guard engineer unit arrives.

“I don’t want to leave anything for the next rotation at this site,” Quijano said. “We want to finish this and see if we can move on to the next site before our time here is done.”

The first order of business was for the engineers to unpack all the building’s trusses from the shipping containers, dismantle them and put them back together while repositioning the truss bolts in preparation for next week’s roof project.

“We also poured the concrete for the formed cavities that make up the walls of the structures,” Quijano said. “We even had time to build a picnic table for the kids of the orphanage and plan to build more in the coming week”.

“The Soldiers from the New York Army National Guard impressed me from day one with their unity and cohesiveness,” said Lt. Thomas Loftis, Lead Engineer for U.S. Army South. Loftis, a Texas Army National Guardsman, is responsible for all engineering construction projects and the living areas used by personnel supporting Operation Beyond the Horizon 2008. “The professionalism of their senior enlisted leaders while taking on really tough assignments in austere conditions is admirable”.