Unit is 1st through the new coming home process 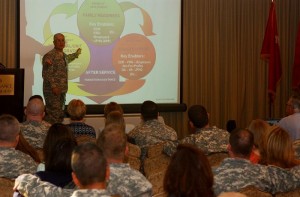 The two-day stay at the Renaissance Westchester Hotel, paid for by the National Guard, is designed to help soldiers make the adjustment from the combat zone to their families, civilian life, and their status as drilling Guardsmen and women. The program is about giving Soldiers the tools they need to successfully reintegrate with their families and communities, said Maj. Gen. Joseph J. Taluto, the New York State Adjutant General. “That’s what we do, we give them the tools they need. They deserve it, so we give it to them.”

“We hope by the end of the process everyone gets what they need to be successful,” he added.

The new program was launched at the request of Taluto . In late August 2007 with a planning process team involving representatives from various organizations with in the Division of Military and Naval Affairs and rolled out its first event in January 2008, said Lt. Col. Patrick Center, the programs coordinator.

The event held this weekend was the first event to fully follow the Adjutant Generals’ full guidelines, added Center. The program consists of three sessions held 30, 60 and 90 days after the Soldiers return from deployment, said Taluto. Each session is designed to deal with the stresses that Soldiers and their families deal with before, during and after a deployment, he added.

The first session introduces the pathway to a successful reintegration. It includes an event located at a resort with a relaxed atmosphere and focuses on providing Soldiers and their families with benefit information as well as putting them in face-to-face contact with benefit providers.

This session also helps Soldiers with a wide range of services ranging from reserving military school slots to assistance in filing out travel vouchers.

The second session returns the Soldier and their family to the relaxed atmosphere of a resort for briefings on anger management, substance abuse, gambling, financial management and other topics or issues that may arise as a result of a deployment.

Studies conducted by the Department of the Army have shown that it is during this time period that issues like these are most likely to begin manifesting themselves leaving Soldiers and their families with no one to talk to.

The third session consists of an awards ceremony, or “Freedom Salute”, held at the unit’s home armory. The ceremony recognizes the unit, Soldiers, family members and all those who supported the unit while it was deployed for their contributions and sacrifices. Medical assessments and further briefings are also carried out during this session.

Taluto credits his recent deployment experience, feedback from other re-deploying Soldiers and a visit to an event hosted by the Minnesota National Guard with helping to develop the vision for the new program. “When I took this job two years ago I knew right away we needed to do more for our families”, Taluto said.

The Minnesota National Guard provided the model, added Taluto. “We simply took what was good from their program and improved what we felt needed to be improved. We didn’t want to re-create the wheel,” Taluto said.

“The program is always evolving, but I believe we are going in the right direction,” he added.

In the future the program hopes to improve by reaching out to more non-governmental organizations that want to help Soldiers and their families and to also relay to the leadership that this program is how we do business, Taluto said.

Each Soldiers and family member in attendance seemed to take something useful from the event.

“The initial feedback is good,” said Lt. Col. Ronnie L. Ridner, the 104th MP commander. It was very beneficial to bring the Soldiers and their families together in a relaxed atmosphere with others who have experienced similar things, he added.

“I found the information on available benefits to be very useful,” said SPC Brenden S. Conklin, a unit administrative specialist assigned to the 104th Military Police. “The chaplains’ presentation was helpful to me,” said Briann E. Conklin, Spc. Conklin’s spouse.

The information provided by the providers was very useful and it was good for the Soldier’s and their families to see their leadership present to show their concern and appreciation, Ridner added.

The new program replaces the “hands off” policy the National Guard had previously implemented that allowed Soldiers and their families 90 days to themselves before being required to attend normal monthly National Guard drills.