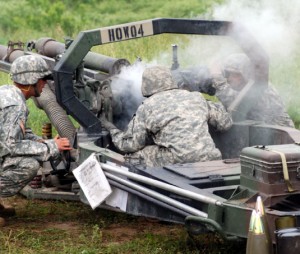 FORT DRUM, NY -- “There’s nothing that gives a Soldier more of a head-rush than sling loading equipment for the first time,” says Capt. Joshua White.

Eighty of the 375 Soldiers of 1st Battalion, 258th Field Artillery were able to experience that rush during the unit’s June annual training at Fort Drum.

“Many of them started out terrified, feeling like they were going to be swept off their feet from the force of the helicopters’ rotors,” said White, the operations officer for the 1-258th. “Fortunately, we’ve been able to train them well enough that they know this won’t happen.”

New York Army National Guard Soldiers of the 1-258th from Jamaica, the Bronx and Newburgh, along with supporting troops from the 42nd Infantry Division, arrived at Fort Drum June 7 to begin their annual training.

In addition to sling load operations, the artillerymen also participated in direct and indirect live-fire exercises with the unit’s seven M102 105mm howitzers, and practiced evacuating overturned Humvees during their time at Fort Drum.

“We conducted dry-fire exercises in preparation for live-fire with the howitzers to make sure our crews were proficient with their weapons beforehand,” said White. “We want the Soldiers to ultimately meet the goal of the Field Artillery, which is accurate first round fire for effect.”

The M102 howitzer, a weapons system first used by the Army in the Vietnam era, will be replaced in 2009 by the new M119A1 howitzer, which weighs about 400 pounds less than its predecessor. The new M119A1 is easier to sling load to the UH-60 Blackhawk, a helicopter used in many combat zones.

“The new howitzer employs the same principles as the M102, but it shoots further and takes less people to operate,” said Lt. Col. Paul Conte, the 1-258th Battalion Commander. “The weapons training conducted here at Fort Drum will give our crew the proficiencies and the skills that they need so that, when they transfer to the new weapons system, they’ll be safe.”

Safety, an important aspect of the training that took place, was encouraged further by the use of the Humvee Egress Assistance Trainer, or HEAT. The HEAT is a simulated Humvee that rotates at various angles in order to teach Soldiers how to evacuate an overturned vehicle.

“The more training you have, whether it involves howitzers or Humvees, the safer and more knowledgeable you are,” said Spc. Gaspar Teri III, a medic for the 1-258th. “That way, when your name is called to go overseas, you’re more prepared and more confident in your abilities.”

The Soldiers of the 1-258th said that the howitzer live-fire exercise performed was the most rewarding aspect of their annual training.

“Everyone’s morale was great,” said Conte. “These soldiers joined the artillery to fire weapons, so they were really happy to be here doing this.”