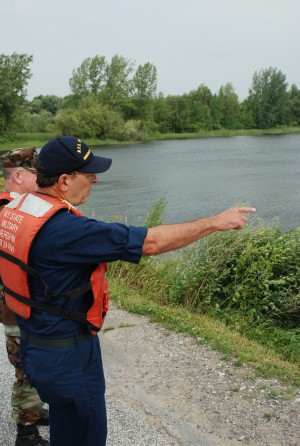 Master Chief Micael Clark and Petty Officer 1st Class Donald Heart, both with the Naval stand on the shore of Lake Champlain at Rouses Point before the start of their morning shift. Clark and Heart assist in patroling the US/Canadian waterway as part of Mission Lake Champlain.

Their joint mission-called “Operation Lake Champlain”-serves to secure the once still waters, now troubled by the uncertainty of high-volume boater traffic.

This former passageway for warships and military cargo throughout the Revolutionary War is now a haven for water sport enthusiasts. During summer months Lake Champlain has more than 200 boats reporting each day and about 30 boats reporting every hour during peak times.

Officials believe this makes Lake Champlain an area of security concerns. In the past operational effectiveness and situational awareness was limited. Officials hope beefing up security will discourage smuggling and other illegal activities from happening.

“The boaters are used to going to one of the three marinas,” said Mark Henry, a spokesman for the Border Patrol’s Swanton Sector

Clark and Heart man a 34-foot Patrol Boat 330 to direct Canadian Boaters entering the US to an inspection dock. Once at the inspection dock boaters undergo a thorough inquest by Border Patrol Officials.

“I am particularly pleased with the role the Naval Militia is playing,” said Henry.

“You have to look at it from a macro point,” said Henry. He says the Naval Militia’s support frees Border patrol agents up to secure other parts of the Lake and land. “If one area is weak smugglers will go to that area.”

The Naval Militia has been assisting Border Patrol Agents during missions since 1978. An increase in boat traffic led to the replacement of an old swing bridge in the late 80s. The new bridge allows boaters from Canada entering the US through the Richelieu River and drivers traveling to and from Vermont and New York State to travel simultaneously-without stopping.

“It’s getting busier and busier,” said Clark, who has been with the Militia for 27 years.

In the past “agents have broken up drug runs and illegal- immigrant smuggling,” said Heart.

Vermont’s U.S. attorney announced last fall that two illegal-immigrant smuggling rings-one based in Montreal, the other based in Toronto-had been disbanded after they had smuggled hundreds of Asians and Latin Americans into the U.S. It hasn’t been concluded that the illegal immigrants were smuggled in through Lake Champlain.

Since beefing up security Border Patrol Officials reported a 22-percent increase in violent incidents during the first nine months of the current fiscal year.

“They’re getting frustrated (because) they’re being denied entry,” said Henry.