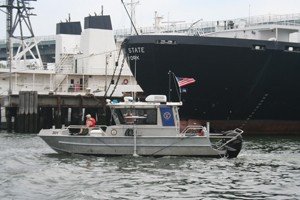 The saboteurs fixed limpet mines to the sides of both the USS Intrepid, the historic aircraft carrier/museum ship in New York harbor, and a cargo ship. They expected to cause panic, and disrupt traffic into and out of the third-busiest port in the United States.

But a side-scanning CodaOctopus sonar, mounted on a New York Naval Militia patrol boat, detected both mines quickly, and the militia members called in New York Police Department Divers to remove them before they detonated.

Now a Coast Guard controlled blimp had spotted a suspicious boat entering the exclusion zone, and the control center quickly routed another Naval Militia Boat onto that contact. Simultaneously, a Civil Air Patrol plane spots a van that could be loaded with dynamite, moving onto a pier at the United States Merchant Marine Academy.

“We could do it without the Naval Militia, but it would not be as robust,” said Dr. Larry Howard, a SUNY Maritime professor and exercise director.

The college provides degrees in maritime and transportation related fields.

Dubbed Trojan Horse, to remind commanders and port security officials that they have to look beyond the obvious, the annual exercise allows maritime security professionals to comply with the Maritime Transportation Act of 2002, Howard said. That law mandates regular exercises for maritime facility operators.

For the Naval Militia, a 2,900 member force of Naval, Marine and Coast Guard reservists who also volunteer for New York state missions, the Trojan Horse exercise provided a chance to exercise at all levels in conjunction with other maritime security agencies, said Naval Militia Captain Robert Pouch, the deputy commander for operations.

“If we have an emergency in the state of New York, we don’t want to meet our mutual aid partners on the day the problem occurs,” Pouch said.

For the three-day exercise, a Naval Militia command team established a command post in the SUNY Maritime Boat House, located on Long Island Sound beneath the Throgs Neck Bridge at Fort Schuyler. From here, Pouch and his team directed Coast Guard boats, Naval Militia vessels, and New York Police Department craft as they responded to security emergencies. A Coast Guard tethered blimp provided an aerial view of the operations area through a live video downlink, as did Civil Air Patrol aircraft.

The Naval Militia command team had a chance to show what they could do and build trust with their partners, Pouch said.

In civilian life, for example, Pouch is Executive Director of the Board of Commissioners of Pilots of the State of New York. “I’ve spent my whole life in maritime shipping,” he said.

Wolf is an administrator at SUNY Maritime and his Marine Corps experience in operational planning, and his connections with maritime security professionals, helped energize the exercises, said Howard.

The day before the SUNY Maritime exercise kicked off, MEBS put ten boats in the water in the Hudson River near West Point to practice security techniques and formations. This was the first time the New York patrol boat fleet exercised as a unit, McKnight said.

MEBS crews also received experience operating around New York’s busy harbors and many bridges. There was also a chance to certify more crewmen on PB 440, the Naval Militia’s high-tech patrol boat that routinely operates with the Coast Guard in New York harbor.

Participation in the Trojan Horse exercise also has a deterrent value, Wolf said.

“The more we do this ahead of an incident, the better we are able to prevent it by showing we have boats and blue lights in the water,” he said.

The New York Naval Militia dates back to 1889, before the Naval Reserve was founded. Since the attacks of 9/11 the Naval Militia, which also includes a small percentage of retired Naval, Marine and Coast Guard personnel has focused on maritime security issues. The Naval Militia maintains a patrol boat in the Hudson River off the Indian Point nuclear power plant in Westchester County and recently concluded a mission assisting the United States Border Patrol in Lake Champlain.

In addition to New York harbor, the state has 127 miles of Atlantic coastline, 454 miles of freshwater coast line along Lakes Erie and Ontario and the St. Lawrence and Niagara Rivers, 145 miles of Lake Champlain waterfront, the five Finger Lakes, and the Hudson, Mohawk, Susquehanna and Delaware River systems.

This massive amount of water necessitates having a state maritime force, said State Sen. Vincent Liebell, chairman of the State Senate Homeland Security Committee. It would be foolish not to plan for security operations in this environment, he added.