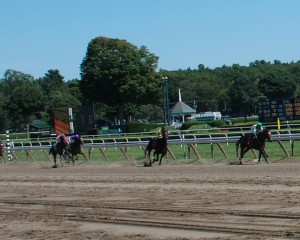 Jockey Alan Garcia atop ’Calling My Colors’ takes 1st place in the third race dubbed ’The New York National Guard Citizen-Soldier Race’ at Saratoga Race Course, Saratoga Spring, NY on Aug 27. The race was part of the Race Courses recognition to military personnel and veterans during ’Proud to Be an American Day’ at the track.

Receiving the trophy was jockey Alan Garcia for his first place win atop ’Calling My Colors’ and trainer Howard Tresher.

The Saratoga Race Course, built in 1864 and the site of the oldest major thoroughbred horse race in the United States, the Travers Stakes, recognized the commitment and sacrifice of New York Army and Air National Guard personnel and celebrated “Proud to Be an American Day” at the track.

“We in the New York National Guard are proud to be part of Saratoga Race Course’s salute to the men and women who defend our nation,” Taluto said.

The day designed to salute military personnel and veterans began as Sgt. Brook Leavitt, with the Joint Force headquarters sang the National Anthem. In addition to the race being dedicated to New York’s service members, track visitors interacted with Soldiers and Airmen, climbed the National Guard rock wall, tested their endurance at a physical fitness testing station and viewed National Guard equipment and recruiting displays. Equipment on hand included a Humvee and other light military tactical vehicles.

The 109th Airlift Wing of the New York Air National Guard, the only American military unit equipped with aircraft that can land on ice, also displayed their “Baby Herc” a replica of the C-130 Hercules the unit flies to Antarctica and Greenland in support of the National Science Foundation.