Army and Air Guard Work Together in Counterdrug Training Effort 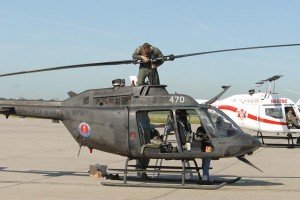 The Buffalo DEA and the Niagara County Drug Force spear headed the program known as Operation Green Monster. Working as a team, DCE/SP provides the training, state and local officials provides the man power and resources to cease the drugs before they hit the streets.

“One single agency alone, could not accomplish what we do,” said Chris Wisniewski, Special agent. “Partnering with each other is the only way to get the job done,” he said. Operation Green Monster is designed to educate state, local and military law enforcement officials on identification, apprehension and successful prosecution tactics on the illegal cultivation of cannabis.

Three fixed wing planes and seven helicopters flew into Niagara for the work shop, with pilots and spotters from 15 law enforcement agencies and the New York Army National Guard. The workshop attendance of more than 60 personnel tripled that of similar classes held throughout the states. The workshop includes both classroom time and real world experience. During the classroom instruction officers were taught marijuana horticulture and cultivation trends. They also learned how to recognize and spot concealed plants from the air. In the second phase of the course law enforcement officials went airborne putting their classroom knowledge to the test.

Pilots flew their aircraft over locations of known cultivation in order to give the officers an aerial view of the magic dragon. Officers were also able to see first hand the tactics that are used to conceal the harvest. Upon finding the plants, the location is tagged using a GPS system, then once back at the shop a strategy is devised. Options include investigating the land owner, removing plants and apprehending the suspect. And depending on the amount, size and location of the plants the sight could be slated for surveillance. Officers that complete the course are not only instrumental in preventing the product from reaching the street but are also able to provide expert testimony at trial, aiding in a greater conviction rate.

The lessons learned during the class are use by the pilots, co-pilots and spotters when ever they are in the air. Whether it’s a routine traffic flight or responding to a call they are always on the lookout for suspicious plants.

“On the flight to Niagara one of the pilots located eight plots,” said Kevin Mekel, the Marijuana Suppression Coordinator, “he tagged it and we’ll take a look at it later,” he said.

“We had an outstanding session, nothing but positive comments and feed back,” said Wisniewski, “we got some real world eradication accomplished and are planning on doing it again next year,” he said.