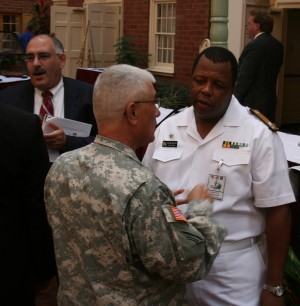 LATHAM, N.Y. -- Senior leaders from the South African Defense Forces spent a day with their counterparts from the New York National Guard to discuss cooperative efforts towards homeland security and trade here on Thursday, September 4. The day-long conference brings together the two nations as part of the National Guard’s State Partnership Program.

“We are proud to host this group of some of South Africa’s most distinguished leaders who, collectively, have brought about great positive change in the peace, prosperity and security of their nation,” noted New York Governor David A. Paterson in written remarks to the conference.

“To make this partnership sustainable requires a better understanding of our two peoples and cultures,” Shabangu said.

As South Africa’s Deputy Minister of Safety and Security, Shabangu is comparable to the U.S. Deputy Secretary of Homeland Security, responsible for the welfare and security of a South Africa’s 44 million residents, nearly half a million square miles of land and some 1,738 miles of coastline.

“One of the biggest challenges our two nations face is terrorism,” Shabangu said. “It is not only a threat here (in the U.S.), but a global threat to peace everywhere.”

“This conference strengthens our mutual understanding, builds professional relationships, shares best practices and serves as a basis for more dynamic cooperation in the future security issues of mutual interest and concern,” said U.S. Ambassador Eric Bost in a letter from Pretoria to the assembled participants. “We have three fundamental missions in the South African Defense Forces,” noted Maj. Gen. Keith Mokoape, Chief of Staff for the South African Army Reserve. “First, we protect the integrity of our country. Second, we provide peacekeeping forces in Africa and third, we provide domestic support in times of crisis.”

It is the role that the New York National Guard plays in the state’s domestic operations that is most interesting to Mokoape.

“It is important for the New York National Guard and the South African Defense Forces to focus on nonmilitary issues in their ongoing partnership,” he said.

New York was paired with South Africa as part of the National Guard State Partnership Program in 2003. The program is designed to build military-to-military, military-to-civilian, and civil security cooperation links between participating countries and their National Guard state partner.

“Our two governments certainly have a growing history of mutual respect and substantive cooperative exchange,” Paterson said in his welcome letter from Albany to the group.

The National Guard State Partnership Program was established in 1993 in response to the radically changed political-military situation following the collapse of Communism and the disintegration of the Soviet Union. The program’s goals reflect an evolving international affairs mission for the National Guard, to promote security cooperation in support of Homeland Defense and Civil Support Missions.

The State Partners actively participate in a host of security cooperation activities ranging from bilateral familiarization and training-like events, to exercises, fellowship-style internships, and civic leader visits. All activities are coordinated through the Theater Combatant Commanders and the US Ambassadors’ country teams, and other agencies as appropriate, to ensure that National Guard support is tailored to meet both US and partner country objectives.

Today, 43 US states, two territories, and the District of Columbia are partnered with 51 countries around the world. The New York State partnership with South Africa is one of the leading engagements in sub-Sahara Africa for the U.S. Africa Command (AFRICOM).

Much like the National Guard State Partnership Program individual nation relationships, AFRICOM also reflects a staff structure that includes significant representation by the Department of State, U.S. Agency for International Development (USAID), and other U.S. government agencies involved in Africa. The command incorporates partner nations and humanitarian organizations, from Africa and elsewhere, to work alongside the U.S. staff on common approaches to shared interests.

The new command was formed in 2007 and is scheduled to become an independent unified command in October of this year.

“I encourage all of our participants to take advantage of opportunities to bring this group together to learn more about the programs,” noted Maj. Gen. Taluto in his remarks to the group that included representatives from numerous New York State government agencies, including public safety, homeland security and education.