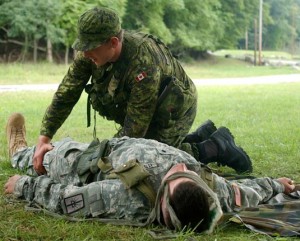 CAMP SMITH, N.Y. - The Binghamton-based 204th Engineer Battalion recently looked north to the 32nd Combat Engineer Regiment (CER) of the Toronto, Ontario-based Canadian Land Forces for a unique training opportunity held at Camp Smith, Sept. 12-14. One squad from each company assigned to the 204th Engineers and one squad from the 32nd CER gathered for a “Best Squad Competition” consisting of events that showcased a variety of Soldiers skills ranging from individual and squad physical fitness to land navigation. “This years’ competition is the third annual squad stakes, but a first to include the Canadians,” said Lt. Col. Carlton C. Cleveland, commander, 204th Engineer Battalion. The event began with the arrival of the squads on Friday afternoon and immediately proceeded with a surprise night land navigation course. Saturday morning kicked off with a modified physical fitness test consisting of two minutes of individual pushups and sit ups and a 1.5 mile squad run that included a react to casualty and buddy carry scenario. After breakfast the competition continued with weapons tasks, squad weapons qualification, communications tasks and first-aid tasks. The days’ events ended with an engineer recon, a task which tests each squad’s troop leading procedures in preparation for convoy operations. “This is not just a competition, it’s a training event,” said Cleveland. “Even if a Soldier gets a no-go, before they leave that station they will be trained in the task.” The idea for the event began about three years ago but did not materialize, said Cleveland. “In May we sent a squad to participate in a training event with the 32nd and they are reciprocating the exchange this weekend,” he added. “The addition of the Canadian team is a good thing,” continued Cleveland. “It’s good to see how other forces do things.” “The best training comes from being able to interact with others,” added 2nd Lt. David R. Bulger, 32nd CER, Canadian Land Forces. Participants found value in the overall training but also singled out at least one aspect of training as being the best part of the weekends’ events. “I was impressed with the training, and the format [competition] kept things interesting,” said Cpl. Brent K. Zapalski, 32nd CER. “The competition style was great; it not only motivated the Soldiers to do their best but also to focus on the overall performance of their team,” added Staff Sgt. Charles Fish, Forward Support Company, 204th Engineer Battalion. One piece of the weekends training was of particular interest to the challengers from north of the border. “The land navigation was great,” said Bulger. “Being a reserve force we don’t get to do it as much as we’d like to. The terrain here is unlike anything we are used to.” The weekends’ events concluded on Sunday morning with an awards presentation to the best squad of 2008; the Buffalo-based 152nd Engineer Company. The best squad received the battalions’ best squad trophy as well as battalion coins, impact Army Achievement Medals and engraved combat knives for each squad member. Cleveland went on to say the Canadian team made a strong showing and already has plans to return to Camp Smith to participate in next years Adjutant General Combat Rifle Marksmanship matches.