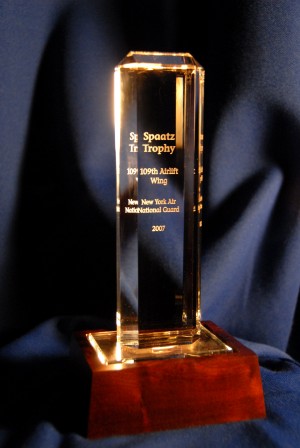 LATHAM -- The men and women of the New York Air National Guard received top honors from the National Guard Association this year with two top unit awards for achievement on September 22.

Members of the 109th Airlift Wing again demonstrated their excellence in serving their nation and the world as the unit was named the recipient of the 2007 Spaatz Trophy during the National Guard Association of the U.S. annual conference in Baltimore, Maryland.

This award was adopted by the Association in 1967. It had been presented by the National Guard Bureau from 1949 until 1967, to recognize the most outstanding squadron in each existing Air Guard Wing. The award, named in honor of a former Chief of Staff of the U.S. Air Force, General Carl S. Spaatz, is today presented to the overall outstanding flying unit in the Air National Guard.

Selection of the winner is based on overall combat readiness during the reporting year and the unit’s performance with respect to all other Air Guard flying units.

Factors included in the evaluation are flying safety; aircraft operation readiness; weapons firing; unit alerts; unit manning; skill level qualifications; retention; drill attendance; operational readiness inspections; outstanding accomplishments and special missions and exercises. Also taken into consideration are any circumstances which were considered adverse to the unit mission and beyond the control of the Spaatz Trophy.

Established in 1959 and first awarded in 1960, these plaques recognize outstanding Air National Guard flying units. The criteria for the award changed frequently throughout the years from 1970, when the plaques were authorized for the five highest-rated Air National Guard flying units, after the Spaatz Trophy winner. Criteria are the same as the Spaatz Trophy.

According to the award citation, the 109th Airlift Wing excelled as the sole operator of the Department of Defense’s (DoD) ski-equipped LC-130H aircraft and is the only unit in the world providing heavy airlift for the DoD and the National Science Foundation (NSF) to deep-field polar sites.

The unit’s airframes are meticulously maintained. The unit completed 32 years of Ski Mission Class-A mishap-free flying in the world’s most unforgiving flying environment. The unit has never had a C-130 Class-A mishap in well over 1,000,000 hours of C-130 flight.

A Class-A mishap is defined as one where there is loss of life or injury resulting in permanent total disability, destruction of an Air Force aircraft, and/or property damage/loss exceeding $1 million.

“This Wing continues to provide extraordinary service to this state and to this great nation.” said Col. Anthony German, 109th Airlift Wing Commander. “I am proud of our Airmen for continuing to excel in the performance of their duties, whether it is here at home, in Antarctica, Greenland or in hostile lands supporting Operations Iraqi freedom and Operation Enduring Freedom.”

“This award reflects the dedication given by all to make the 109th Airlift Wing the best in the world," said German.